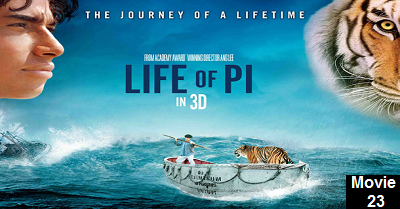 A British novelist named Yann Martel meets an Indian man, Pi Patel, with some knowledge from Pi's late father's friend, known to Pi as "Mamaji", for a good book. Pi tells the novelist his life story.
In a flashback, Pi's father named him Piscine Molitor after a swimming pool in France. As a child he changed his name to "Pi" (the Greek letter, π) because he was tired of being called "Pissing Patel" (due to the sound of his name). Pi's family owned a zoo, and Pi took great interest in the animals, especially a Bengal tiger named Richard Parker. When Pi tries feeding the tiger, his father runs in and angrily tells him that the tiger is dangerous, and forces Pi to witness the tiger killing a goat to prove his point. Pi is raised Hindu and vegetarian, but at 12 years old, he is introduced to Christianity and then Islam, and decides to follow all three religions as he "just wants to love God". His mother supports his desire to grow, but his father, a rationalist, tries to convert him to his own way of thinking. Pi meets a girl named Anandi in a dance class where he plays the mridangam, and they fall in love.
When Pi is 16, his father decides to move the family to Canada, where he intends to settle and sell the zoo animals. Pi bids farewell to his brief lover and promises to return. Pi's family books passage on a Japanese freighter named Tsimtsum. During a storm, the ship founders while Pi is on deck. He tries to find his family, but a member of the crew throws him into a lifeboat. As the ship falls into the sea, a freed zebra lands on the boat with him. Pi watches helplessly as the ship sinks, killing his family. After the storm, Pi finds himself in the lifeboat with the injured zebra, and is joined by an orangutan. A spotted hyena emerges from a tarp covering half of the boat and snaps at Pi, forcing him to retreat to the top of the tarp while it kills the zebra and orangutan. Later, Richard Parker emerges from under the tarp, killing the hyena.
Pi retrieves biscuits, water rations and a hand axe and builds a small raft to stay at a safe distance from Richard Parker. Pi begins fishing and is able to feed Richard Parker. He also collects rain water for them to drink. When the tiger jumps off to hunt fish, Pi considers letting it drown but ultimately helps it climb back into the boat. During a night-time encounter with a breaching humpback whale Pi loses much of his supplies, forcing him to eat fish for the first time in his life. Pi trains Richard Parker to accept him in the boat and realises that caring for the tiger is keeping him alive.
Weeks later they reach a floating island of edible plants, supporting a mangrove jungle, fresh water pools, and a large population of meerkats. Pi and Richard Parker eat and drink freely and regain strength. At night, the island transforms into a hostile environment: Richard Parker retreats to the lifeboat and the meerkats sleep in the trees while the fresh water pools turn acidic and digest the dead fish in the pools. Pi discovers that the island itself is carnivorous after finding a human tooth embedded in a flower. The next day, Pi and Richard Parker leave the island.
The lifeboat reaches the coast of Mexico. Pi is crushed that Richard Parker does not acknowledge him before disappearing into the jungle. Pi is rescued and brought to a hospital. Insurance agents for the freighter interview him, but do not believe his story and ask what "really" happened. He tells a less fantastic account of sharing the lifeboat with his mother, a Buddhist sailor with a broken leg, and the ship's cook. According to this story, the cook killed the sailor in order to eat him and use him as bait. In a later struggle, Pi's mother pushed her son to safety on a smaller raft before the cook stabbed her and threw her overboard. Pi later returned, took the knife and killed the cook.
Next, Yann notes the parallels between the two stories: the orangutan was Pi's mother, the zebra was the sailor, the hyena was the cook, and Richard Parker was Pi. Pi asks which story the writer prefers, and the writer chooses "the one with the tiger" because it is "the better story", to which Pi responds, "Thank you. And so it goes with God". Glancing at a copy of the insurance report, Yann sees the agents wrote that Pi survived 227 days at sea with an adult Bengal tiger, meaning they had also chosen the more fantastic story to be the one recorded as the real story.