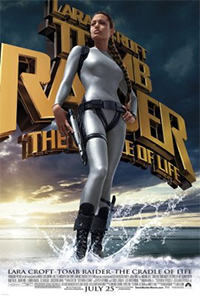 The film begins on Santorini island, Greece, during a wedding when it is interrupted by an earthquake. The earthquake uncovers the Luna Temple, built by Alexander the Great to house his most prized treasures. Among these treasures is a glowing orb with a pattern resembling a code etched into it. Lara finds this orb, as well as a strange medallion; but both are stolen by the crime lord Chen Lo (Simon Yam). Lara (Angelina Jolie) only just manages to escape as a subsequent earthquake causes the Luna Temple to collapse, while her two companions are killed by Chen's men. Lara is tasked by MI6 to find Pandora's Box, an object from ancient legends that supposedly contains a deadly plague, before Nobel Prize-winning scientist turned bio-terrorist Jonathan Reiss (Ciarán Hinds) can get his hands on it. The key to finding the box, which is hidden in the mysterious Cradle of Life, is a magical luminous sphere that serves as a map, the one stolen by Chen Lo in Santorini, who plans to sell the sphere to Reiss. To help her track down Chen Lo and the ball, Lara recruits an old lover, Terry Sheridan (Gerard Butler), a former mercenary and Royal Marine, who was in prison in the Republic of Kazakhstan.
Among the action sequences that take place during this time are Lara and Terry's entry into China, a fight scene in suburban Shanghai, and a leap off the then-under-construction International Finance Centre skyscraper in Hong Kong, using special winged flight-suits that Terry had arranged for, landing on a ship out in the Kowloon Bay after taking the Orb from Reiss. It is revealed that the medallion Lara also recovered from Chen Lo shows how to unlock the information in the Orb; a certain arrangement of musical sounds. Meanwhile, Lara and Terry begin to fall in love again; but Lara starts to back away from him knowing that she could easily kill him if he betrays her. She seduces him one morning, then leaves him handcuffed to a bedpost, saying "I'm not leaving because I can't kill you; I'm leaving because I could."
Lara finds her way to a floating houseboat where a Chinese family is watching SpongeBob SquarePants when Lara asks to use their satellite to communicate with Bryce (Noah Taylor). After some technical difficulties, Bryce sends Lara the file and she uses the sounds make the The Orb reveal the location of the Cradle of Life, which is revealed to be somewhere near Mount Kilimanjaro in Tanzania, thanks to an ancient hologram produced by the Orb. Lara sends this info to Bryce back at Croft Manor. After the transmission, it is revealed that Reiss and his men had infiltrated Croft Manor and captured Bryce and James "Hilly" Hillary (Chris Barrie).
Lara meets up with Kosa (Djimon Hounsou), an African friend who serves as her translator as they obtain the information from a local tribe about the Cradle of Life. Kosa translates for the tribe's chieftain stating that the Cradle of Life is in a crater protected by the "Shadow Guardians" (humanoid creatures which kill immediately when they sense a movement and vanish into wet patches on dead trees). As the expedition sets out, Lara, Kosa, and the tribesmen with them are ambushed by Reiss' soldiers. More tribesmen are killed by Reiss' soldiers with some of the soldiers being killed by Lara in the fight. The fight ends with Lara surrendering to overwhelming odds as Reiss' helicopter started to land. Reiss and Sean (Til Schweiger) threaten to kill Bryce, Hillary, and Kosa unless Lara leads him and his soldiers to the Cradle of Life. Upon arrival at the crater, they encounter the Shadow Guardians with the wet patching on the dead trees being the blood of their victims. Sean and most of Reiss' soldiers are killed by the creatures. When Lara drops the Orb into the hole that opens the entrance to the Cradle of Life, the Shadow Guardians fall to pieces and both Lara and Reiss are drawn into the Cradle of Life, a labyrinthine cavern made of some strange crystalline substance, racked by bolts of energy where "'sky and earth are one, direction meaningless." Inside there is a pool of highly corrosive black acid (linking back to one of the myths about Pandora's Box) which holds the box and where the laws of physics do not apply, as Lara and Reiss are able to walk (upside down) along the ceiling of the cave. Terry arrives, frees Reiss' captives, and catches up to Lara.
Following a climactic fistfight between Lara and Reiss, Reiss is knocked into the acid pool by Lara after he is distracted by Terry, killing and dissolving him. When the couple tries to leave, Terry attempts to take the box as compensation for finding it. But Lara staunchly refuses to let him, knowing the danger if the box were ever open. Despite her love for him, this results in Lara being forced to fatally shoot him in self-defense just after Terry draws his own gun preparing to shoot Lara. Lara is tempted to open the box herself, but realizes that some artifacts are not meant to be found. Placing the box back in the acid pool, she leaves, giving the medallion to the chieftain.
Lara and Kosa leave the village along with Bryce and Hillary (who were unknowingly being prepared for a tribal wedding ceremony). The film ends with Lara driving the jeep away from the setting sun.