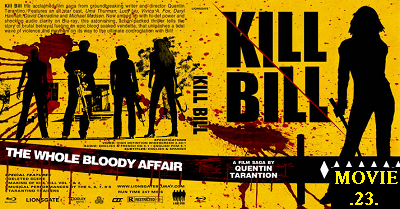 Tarantino announced at the 2008 Provincetown International Film Festival that a single film version of part 1 and 2 called Kill Bill: The Whole Bloody Affair with an extended animation sequence was to be released in May 2009. Screenings of the complete film began on March 27, 2011 at the New Beverly Cinema. This was verified to be the original print that premiered at the Cannes Film Festival in 2003, before the decision was made to split the film into two parts due to the roughly four-hour length. The print shown at the New Beverly even retained the French subtitles necessary for screening an English-language film at the Cannes festival.
Differences in this version in comparison to the separate Vol. 1 and Vol. 2 versions include the "old Klingon proverb" shown at the beginning of Vol. 1 is not present, although a dedication to filmmaker Kinji Fukasaku is in its place; the anime sequence is slightly longer with more gore; The House of Blue Leaves battle is in color (it had been toned down to black and white for the USA release of Vol. 1 only)[citation needed]; Sofie Fatale loses both of her arms; the revelation that The Bride's daughter is alive at the end of Vol. 1 is not present, nor is the short black and white scene at the beginning of Vol. 2 where The Bride is driving and sums up the action to that point; in its place is a small musical intermission that leads straight into Chapter 6.