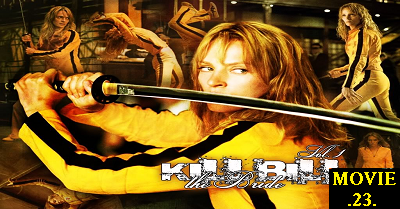 An intertitle displays the proverb "Revenge is a dish best served cold". A pregnant woman (Uma Thurman), known as "The Bride", lies badly wounded at her wedding, telling an unseen Bill (David Carradine) that she is carrying his baby as Bill shoots her in the head. However, it is later revealed that she miraculously survives the headshot, but was left comatose for four years.
The Bride's second revenge killing is shown some time after her recovery. The Bride finds Vernita Green (Vivica A. Fox) at her home and fights her, but they cease after Vernita's young daughter Nikki arrives from school. It is revealed that both women are former members of the Deadly Viper Assassination Squad, elite assassins under the employ of Bill. Bill and the Deadly Vipers had attacked The Bride at her wedding. While the two women are talking in the kitchen during their truce, Vernita attempts to kill The Bride with a pistol hidden in a box of "Kaboom" cereal. The shot misses the Bride, who retaliates by throwing a knife to Vernita's chest; she dies slowly. When the Bride notices Nikki standing in the doorway, she offers Nikki revenge should she seek it as an adult, then leaves. The Bride then strikes Vernita's name off a checklist; the name "O-Ren Ishii" has already been crossed out.
Going back to the time of her coma, another member of the Deadly Vipers, the one-eyed Elle Driver (Daryl Hannah), enters The Bride's hospital room where she lies comatose, and prepares a lethal injection. Driver is interrupted by Bill on the phone, who states they will take action only if she awakes. Four years later, the Bride awakens and is horrified to discover that she is no longer pregnant. Meanwhile, she learns that a hospital worker named Buck has been raping her in her comatose state, and accepting cash from those who wish the chance to do the same. While a trucker is preparing to assault her, the Bride bites off his tongue, killing him. She then incapacitates and kills Buck by repeatedly smashing his head between a door and its jam, and steals Buck's truck. She swears revenge, and picks her first target: O-Ren Ishii (Lucy Liu), who has since become the leader of the Tokyo yakuza.
Once she recovers, the Bride travels to Okinawa to obtain a sword from legendary swordsmith Hattori Hanzō (Sonny Chiba), who has sworn never to forge a sword again. After learning that her target is his former student, Bill, he agrees he is morally obligated to forge his finest sword for her. The Bride tracks down O-Ren at a Tokyo nightclub, challenging her to a fight and severing the arm of Sofie Fatale (Julie Dreyfus), O-Ren's assistant and a protégée of Bill's. She then fights off O-Ren's Yakuza army, including the elite "Crazy 88" squad and O-Ren's personal bodyguard, 17-year-old sadist Gogo Yubari (Chiaki Kuriyama), before dueling O-Ren in a snow-draped Japanese garden and killing her. She finally tortures Sofie into revealing information about Bill, leaving Sofie alive to tell Bill that the Bride is coming to kill him and the others. Bill asks Sofie whether the Bride knows that her daughter is, in fact, still alive.