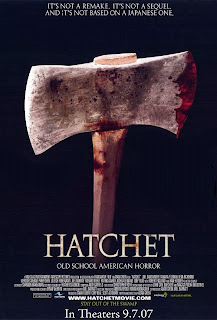 Sampson (Robert Englund) and his son Ainsley (Joshua Leonard) are fishing in a swamp. While Ainsley is urinating, Sampson falls silent; Ainsley goes to see where he is and finds Sampson's corpse. He quickly grabs his harpoon, only to be murdered by an unknown monstrous being.
During a Mardi Gras celebration in New Orleans, there is a group of friends including Ben (Joel Moore) and his best friend Marcus (Deon Richmond). Ben decides to go on a haunted swamp tour, and Marcus agrees to join him. The two find the tour closed because the guide, Rev. Zombie (Tony Todd), was sued for negligence. Rev. Zombie suggests that they try a place farther down the street, owned by the over-the-top, inexperienced tour guide Shawn (Parry Shen). Marcus decides to leave but changes his mind upon seeing two topless girls: Misty (Mercedes McNab), a ditzy porn star, and Jenna (Joleigh Fioreavanti), a bossy, boastful, up-and-coming actress. Their sleazy director, Doug Shapiro (Joel Murray), is also present. Ben pays for himself and Marcus and Shawn leads them to his tour bus, where the other tourists, Jim (Richard Riehle) and Shannon Permatteo (Patrika Darbo), a Minnesota couple, and the quiet, hot-tempered Marybeth (Tamara Feldman) are waiting.
Shawn does not know what he is doing, which the others realize as they arrive at the swamp. Shapiro has Misty and Jenna strip down and film a scene for Bayou Beavers as everyone boards the boat, while a homeless swamp-dweller warns them away from the swamp. Shawn leads them through swamplands and past abandoned houses, including one where Victor Crowley (Kane Hodder), a deformed creature, lived. Shawn mentions "one night Victor's dad (also Kane Hodder) goes crazy and whacks him in the face with a hatchet" while looking at "ghost lights"; however, Shannon sees someone in the trees, and Shawn accidentally crashes into a rock, sinking the boat. To reach land, they must walk across a broken tree. Jim is bitten on the leg by an alligator, making him, Marybeth, Misty and Shapiro fall into the water. They reach shore and run to safety, while Jim bleeds profusely. They realize that Shawn is not a tour guide; he is just a college student looking for money. Marybeth takes out a gun she brought and informs them that her father and brother, Sampson and Ainsley, disappeared while fishing nearby, presumably at Crowley's hands. She then tells them the real story of Victor Crowley.
Long ago, presumably the 1940s–60s, Crowley was a deformed boy who was kept hidden from the world by his father. One Halloween, a group of kids decided to scare Victor by throwing fireworks into his house, but it was engulfed in flames. Victor's father tried hacking down the door with a hatchet, but because Victor was pressed up against the other side of the door, he hit him in the face with the hatchet, killing him. Victor's father died of a broken heart ten years later. Marybeth believes Victor roams the swamp as a vengeful spirit.
Victor mostly kills people near his house, which they are standing in front of. Shannon becomes infuriated with how scared everyone is and decides to help her husband into the house herself, in which they are both killed by Victor. Marybeth shoots Victor but this only makes him fall. While fleeing, Shapiro is separated from the group and killed. After finding Shapiro's corpse, Shawn, Jenna, Misty and Marcus stand guard as Ben and Marybeth get weapons only to come across Sampson's and Ainsley's bodies. The four are startled by noises in the bushes that turn out to be made by a small animal. Jenna is attacked and injured by Victor with a Belt Sander just as Marybeth and Ben arrive with weapons. Ben hits Victor with a shovel, making him fall and then stabs him with a pitchfork. Shawn tries to get the shovel but Victor grabs it first and decapitates him with it. He then kills Jenna by impaling her with the same shovel that decapitated Shawn while the others run.
The survivors decide to lure Victor back to his house and set him on fire with the gasoline tanks in the shed. Ben goes into the shed to retrieve a gasoline tank while Misty stands guard and Marybeth and Marcus act as bait. Marybeth and Marcus discover that Misty is missing, and her corpse is thrown onto Ben by Victor, first her decapitated head and then her torso. Ben finds a tank and throws it on Victor while Marybeth and Marcus set him on fire, but he is extinguished thanks to rain. The three begin running through a cemetery and find the gate locked; Ben is tackled by Victor, who drools on his face before he is dragged to safety. They start running away, but Marcus is grabbed by Victor and killed. Victor grabs a gate pole and chases Ben and Marybeth, throwing it into Ben's foot. Marybeth bends the pole until it is pointed at Victor, who impales himself upon it. Ben and Marybeth board Sampson's boat and flee; Marybeth is snared by seaweed and pulled underwater. She sees Ben's arm sticking into the water for her to grab, but is pulled up by Victor, who is holding a dying Ben's severed forearm. The film ends with Victor holding her as she screams.