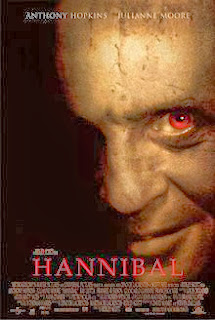 Ten years after tracking down serial killer Jame Gumb, FBI Special Agent Clarice Starling (Moore) is unjustly blamed for a bungled drug raid. Starling and her connection to Hannibal Lecter (Hopkins) come to the attention of Lecter's only surviving victim, Mason Verger (Oldman), a wealthy child molester whom Lecter left horribly disfigured and paralyzed after having been assigned as Verger's court-appointed therapist.
Verger uses his immense wealth and political influence to have Starling reassigned to Lecter's case and meets with her in his mansion. Verger is pursuing an elaborate scheme to capture, torture, and kill Lecter, and hopes Starling's involvement will draw him out. Indeed, Lecter sends her a taunting letter after learning of her public disgrace. Though the letter contains no clue to Lecter's whereabouts, Starling detects a strange fragrance that a perfume expert later identifies as a skin cream whose ingredients are only available to a few shops in the world. She contacts the police departments of the cities where the shops are located, requesting surveillance tapes. One of the cities is Florence, where Chief Inspector Rinaldo Pazzi (Giannini) is investigating the disappearance of a library curator. Pazzi questions Lecter, who is masquerading as Dr. Fell, the assistant curator and now caretaker of the library.
Upon recognizing Dr. Fell in the surveillance tape, Pazzi accesses the ViCAP database of wanted fugitives. He learns of Verger's US$3 million reward to anyone turning Lecter over to him rather than to the FBI. Lured by Verger's bounty, Pazzi ignores Starling's warnings against trying to capture Lecter alone. He recruits a pickpocket to obtain a fingerprint of Lecter to show as proof of Lecter's whereabouts and thus collect the reward. Lecter mortally wounds the pickpocket, who nonetheless manages to get the print and provide it to Pazzi, who in turn contacts Verger. Lecter then baits Pazzi into an isolated room of the library, ties him up with electrical cords, and hangs and disembowels him, before escaping back to the United States.
Verger bribes Justice Department official Paul Krendler (Liotta) to accuse Starling of withholding a note from Lecter, leading to her suspension. Lecter lures Starling to Union Station but Verger's men, who have followed Starling, capture Lecter and transport him to Verger. When her superiors refuse to act, Starling, on her own initiative, infiltrates Verger's estate. Verger means to have Lecter eaten alive by a herd of wild boars bred specifically for this purpose. Starling intervenes to free Lecter but is herself wounded, and Lecter rescues her. Verger orders his private physician Cordell (Ivanek) to shoot Lecter, but Lecter persuades Cordell to throw his employer into the pen, where he is killed by the boars.
Lecter takes Starling to Krendler's secluded lake house and treats her wounds. When Krendler arrives for the Fourth of July, Lecter subdues and drugs him. Starling, disoriented by morphine and dressed in a black velvet cocktail dress, awakens to find Lecter cooking and Krendler in a wheelchair seated at the table set for an elegant dinner. Weakened by the drugs, she looks on in horror as Lecter removes the top of Krendler's skull, cuts out part of his prefrontal cortex, sautées it, and feeds Krendler his own brain.
After the meal, Starling tries to attack Lecter but he overpowers her. She manages to handcuff his wrist to hers, and with police incoming to the residence, Lecter brandishes a meat cleaver and severs his left hand to escape. Lecter is later seen on a flight with a boxed lunch on his pull-down table. As he prepares to eat his meal, including a small cooked portion of what is assumed to be Krendler's brain, a young boy seated next to him asks to try some of his food. Lecter lets the boy eat some of his lunch, telling him "it is important... to always try new things."