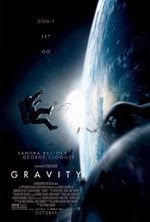 Dr. Ryan Stone is a Mission Specialist on her first space shuttle mission aboard the Space Shuttle Explorer. She is accompanied by veteran astronaut Matt Kowalski, who is commanding his final expedition. Kowalski, who is wearing a thruster pack, flies around the space shuttle testing its operation. However, during their final spacewalk to service the Hubble Space Telescope, Mission Control in Houston warns the team that debris from a Russian missile strike on a defunct satellite has caused a chain reaction of destruction and that they must abort the mission. Shortly afterward, communications with Mission Control are lost, though Stone and Kowalski continue to transmit in hope that the ground crew can still hear them.
High-speed debris strikes the Explorer and detaches Stone from the shuttle, leaving her tumbling through space. Kowalski soon recovers Stone and the two use the thruster pack to make their way back to Explorer. They discover the shuttle has been damaged far beyond usability and the rest of the crew is dead. They use the thruster pack to make their way to the International Space Station (ISS), which is in orbit only about 100 km (60 mi) away. Kowalski estimates they have 90 minutes before the debris field completes an orbit and threatens them again.
En route to the ISS, the two discuss Stone's life back home and the death of her young daughter in a schoolyard accident. As they approach the slightly damaged ISS, they see that its crew has evacuated in one of the Soyuz modules and that the parachute from the other capsule has been accidentally deployed, rendering it useless for return to Earth. However, Kowalski suggests that the remaining Soyuz, designated TMA-14M, can still be used to travel to the nearby Chinese space station Tiangong to retrieve another module that can take them to Earth. Out of air and maneuvering power, the two try to grab onto the ISS as they fly by. At the last moment, Stone's leg becomes entangled in the Soyuz's parachute cords, but Kowalski realizes that his momentum will carry them both away; over Stone's protests, he detaches himself from the tether so that Stone might survive, and the tension in the cords pulls her back towards the ISS. As Kowalski floats away, he radios additional instructions and encouragement to Stone.
Stone enters the ISS via an airlock but must hastily make her way to the Soyuz to escape a fire. As she maneuvers the capsule away from the ISS, the tangled parachute tethers prevent Soyuz from separating from the station. She spacewalks to release the cables, succeeding just as the debris field completes its orbit and destroys the station. Stone aligns the Soyuz with Tiangong but discovers the craft's thrusters have no fuel. After a brief communication with a Greenlandic Inuit fisherman named Aningaaq on Earth's surface, presumably using a ham radio, Stone resigns herself to being stranded and begins decompression of the cabin in order to commit a painless suicide via hypoxia. As she begins to lose consciousness, Kowalski appears outside and enters the capsule. Berating her for giving up, he tells her to use the Soyuz's landing rockets to propel the capsule toward Tiangong. Stone realizes that Kowalski's return was a hallucination, but gains new motivation to live. She restores the flow of oxygen and uses the landing rockets to navigate toward Tiangong.
Unable to dock the Soyuz with the station, Stone ejects herself via explosive decompression and uses a fire extinguisher as a makeshift thruster to travel to Tiangong. Space debris has knocked the Chinese station from its trajectory, and it is rapidly deorbiting. Stone enters the Shenzhou capsule just as Tiangong starts to break up on the upper edge of the atmosphere. As the capsule re-enters the Earth's atmosphere, Stone hears Mission Control over the radio tracking the capsule. It lands in a lake, but an electrical fire inside the capsule forces Stone to evacuate immediately. Opening the capsule hatch allows water to rapidly fill the capsule, which sinks, forcing Stone to shed her spacesuit underwater and swim ashore. She takes her first shaky steps on land, in the full gravity of Earth, where she awaits rescue.