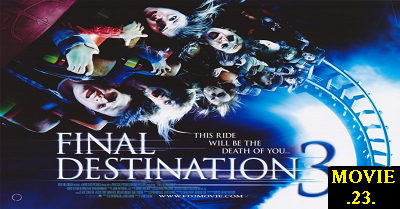 Six years after the explosion of Flight 180, Wendy Christensen (Mary Elizabeth Winstead), the school photographer at McKinley High School, visits an amusement park along with her friends Kevin Fischer (Ryan Merriman), Jason Wise (Jesse Moss), and Carrie Dreyer (Gina Holden). As Wendy and her friends board the Devil's Flight roller coaster, she has a premonition that it will crash, killing everyone on board. Wendy panics and manages to get off the roller coaster along with Kevin, Wendy's younger sister Julie (Amanda Crew), Ian McKinley (Kris Lemche), Perry Malinowski (Maggie Ma), Erin Ulmer (Alexz Johnson), Lewis Romero (Texas Battle), Frankie Cheeks (Sam Easton), and Ashley Freund and Ashlyn Halperin (Chelan Simmons and Crystal Lowe). Minutes later, the disaster occurs and Jason and Carrie are brutally killed in the resulting accident. A few days after the disaster, Kevin tells Wendy about the crash of Flight 180, and claims that the people who got off of the roller coaster will start dying in the same order they were meant to die in, just as Alex and his friends did. Once again, survivors die in a series of strange accidents, but Wendy, Kevin, and Julie come to believe they have avoided their own fates when Ian dies. Five months later, their attempts to survive later prove fruitless when all three cross paths and die in a bizarre subway accident.