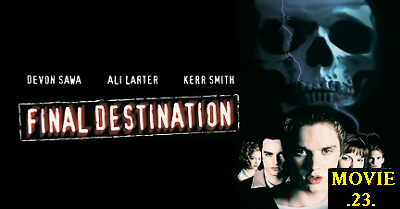 Alex Browning (Devon Sawa) is going on his high school trip to Paris along with his fellow students and teachers. Before take-off, Alex has a premonition that the flight will explode on take-off, killing everyone on board. When events from his vision begin to repeat themselves in reality, he attempts to stop the flight leading to a handful of passengers being left behind including Clear Rivers (Ali Larter), Carter Horton (Kerr Smith), Billy Hitchcock (Seann William Scott), Valerie Lewton (Kristen Cloke), Terri Chaney (Amanda Detmer), and Tod Waggner (Chad Donella). After Alex and his friends are forced off the plane, the airliner explodes in mid-air, killing everyone left on it. When Tod dies in a bizarre accident only a month later, Alex begins to suspect that they were never meant to get off the plane that night. As the survivors begin to die one-by-one, those that remain struggle to find a way to cheat Death's plan. Six months later, Alex, Clear, and Carter relax in Paris having believing they've finally cheated Death. However, Carter is killed as he attempts to rescue Alex from a falling neon sign.