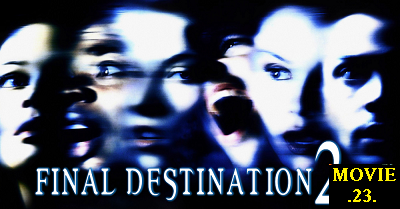 One year after the explosion of Flight 180, Kimberly "Kim" Corman (A. J. Cook) has a premonition of a pile-up on Route 23, killing everyone involved. She stalls her SUV on the entrance ramp with her three best friends Shaina, Dano, and Frankie (Sarah Carter, Alex Rae, and Shaun Sipos). This stops police officer Thomas Burke (Michael Landes), Eugene Dix (T.C. Carson), Rory Peters (Jonathan Cherry), Kat Jennings (Keegan Connor Tracy), Nora and Tim Carpenter (Lynda Boyd and James Kirk), Evan Lewis (David Paetkau), and pregnant Isabella Hudson (Justina Machado) from entering the freeway. While Officer Burke questions Kimberly about the inconvenience, her vision becomes a reality and an 18-wheeler truck carrying cut lumber causes the pileup, sending vehicles colliding into the wreckage; another 18-wheeler hauling automobiles, trying to avoid the accident, plows into Kimberly's SUV, killing Shaina, Dano, and Frankie. In the days following the accident, Kimberly learns of the crash of Flight 180 and teams up with the only survivor, Clear, to try to save a new group of people from Death's plan. This time, the survivors are warned that only "new life" can defeat Death and are killed one-by-one as they attempt to protect Isabella as her delivery date draws closer. It is revealed that Isabella was never meant to die in the pile-up, and Kimberly drowns herself into the lake so that she may be resuscitated by emergency staff, and thus be granted "new life". The film ends with Kimberly and Officer Burke witnessing the death of a young boy who was saved by Rory during the course of the film, revealing that Death's plan is still in action.