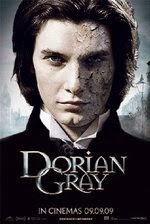 When a naïve young Dorian Gray arrives in a train to Edwardian London, to inherit an estate left to him by his abusive Grandfather, he is swept into a social whirlwind by the charismatic Lord Henry Wotton, who introduces Gray to the hedonistic pleasures of the city. Lord Henry's friend, society artist Basil Hallward, paints a portrait of Gray to capture the full power of his youthful beauty. When the portrait is unveiled, Gray makes a flippant pledge: he would give anything to stay as he is in the picture—even his soul.
Gray meets and falls in love with young budding actress Sibyl Vane. After a few weeks, he proposes marriage to her, but after Lord Henry tells Gray that having children is "the beginning of the end", he takes Gray to a brothel. This breaks Sibyl's heart as Gray leaves her, and she drowns herself soon after. Gray learns of this next day from her brother James ("Jim"), who tells Gray that Sybil was pregnant. Jim then tries to kill Gray before being restrained and carried off by the authorities. Gray's initial grief disappears as Lord Henry persuades him that all events are mere experiences and without consequence, and his hedonistic lifestyle worsens, distancing him from a concerned Hallward.
Gray goes home to find the portrait of himself warped and twisted and realises that his pledge has come true; while the portrait ages, its owner's sins are shown as physical defects on the canvas. The chaos of the portrait of Gray starts, leading him to brutally kill Hallward after telling him his secret, dumping the body in the River Thames.
Having left London to travel for many years, Gray returns to London and during the welcome-back party the guests are surprised to see that he has not aged at all. He becomes close to Lord Henry's daughter, Emily, a member of the UK suffragette movement, despite Lord Henry's distaste for such a relationship due to Gray's lifestyle and unnatural appearance, Emily having provided Lord Henry with a greater moral focus.
Although Gray appears genuinely interested in changing his ways as he spends time with Emily, matters are complicated when he is confronted by Jim, still seeking revenge for his sister's death. Despite Gray's attempts to pretend to be someone else by pointing out his apparent age, Jim nevertheless deduces Gray's true identity, only to be killed by a train while pursuing Gray in the London Underground. As Gray makes arrangements to leave London with Emily, Lord Henry's study of old photographs makes him remember the time when he teased Gray to deal with the devil for eternal youth and beauty at the cost of his soul.
Breaking into Gray's house as Gray and Emily are making plans to leave together, Lord Henry discovers the concealed portrait, but is interrupted by Gray before he can uncover it. Although Gray attempts to convince Lord Henry that he still cherishes his friendship and genuinely loves his daughter, Lord Henry discovers a stained scarf of Basil's in a box, prompting Gray to angrily declare that he is what Lord Henry has made him, the personification of the life he preached but never dared practise. Full of anger and grief, Gray attempts to strangle Lord Henry, but is distracted by Emily's call long enough for Lord Henry to knock him aside and expose the portrait.
Disgusted and horrified at the twisted sight on the canvas, Lord Henry throws a lit lamp at the portrait, causing it to catch fire, subsequently locking the gate of the attic, to ensure Gray and the painting are destroyed, before his daughter sees the ruckus as she pleads with Gray for the key. Gray, after seeing her and realising that he really loves her, turns his back as Lord Henry drags his daughter out of the house, his last words being to assure Emily that she has his whole heart. Resolving to end it all, Gray stabs the painting with a poker, causing his body to age the years that it has never suffered, Gray charging at the portrait to fully impale it as his years catch up to him before the attic is consumed by an explosion.
A few months later, scarred from the explosion and after attempting to reconcile with Emily through Agatha over the phone, Lord Henry heads to his attic where he keeps the now-youthful portrait of Gray, grimly noting that nobody will look at it now. As Lord Henry leaves, the portrait's eyes glow, suggesting that Gray's soul may still be within the portrait even after his death.