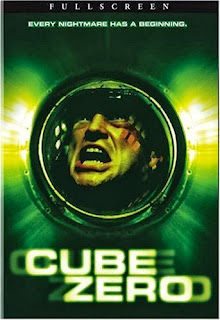 The film starts with a man, Ryjkin, trying to escape from the Cube. He enters a cube, and is sprayed with liquid, but thinks it is only water. However, when he rubs the back of his hand, a piece of flesh falls off, and he realizes that his body is disintegrating, and that he was sprayed with a very strong base. He then melts on the floor, screaming.
A man named Eric watching this in an observation room with his co-worker named Dodd, reveals that it is only a recording. Afterwards, Eric is shown to be sketching a portrait of Dodd (in the form of a superhero called Chessman), whilst playing chess with Dodd, who has a chess board in front of him, which Eric is not looking at, as he is on the other table, just drawing and naming his moves. Eric is vastly intelligent, so he can already calculate all of Dodd's moves. After Eric wins, he asks Dodd questions about their missing colleagues, but Dodd tells him not to ask too many questions or get involved with the occupants of the Cube, because it wouldn't make "those upstairs" happy.
Both Eric and Dodd get an order from "upstairs", which asks them to record the dream of a subject, Cassandra Rains. In her dream, Eric sees that she was captured, while walking in a pleasant forest with her daughter named Anna. After waking, Cassandra meets the other occupants of the Cube. One of the males placed in the cube, Robert Haskell, has a tattoo on his forehead like the soldier who captured Cassandra. However, Haskell, like everyone else, has no recollection of his former life, nor how he got here, he only knows his name. According to what Eric and Dodd know, everyone in The Cube was facing a death sentence and was presented a choice: Go in the Cube with their memory completely erased or be put on a death sentence. Only if a person signs the consent form will he or she then be placed in The Cube. Eric discovers that there is no consent form in Cassandra's file and argues with Dodd that they should inform the people "upstairs" about this. Meanwhile, Eric and Dodd get "lunch" from "upstairs", from the elevator, which is actually a pill containing a flavour they have ordered.
Just when he is about to make a call to the superiors, the phone rings. They are instructed to perform the "exit procedure" for a subject who has reached one of the exits of the Cube and is facing his final challenge. They see that it is one of their former colleagues, Owen. During the exit procedure, Owen is first asked (by Dodd over the speaker) if he remembers his name. Owen is then asked if he believes in God, and when he answers no, Eric is ordered to press the "no" button. After he does, Owen is immediately incinerated. Eric argues with Dodd over the fate of Owen, on which he says that he said "no", and that no one said yes. Eric realizes that the Cube is inhumane, and that those "upstairs" are planning to place people in The Cube without their consent and that they will just randomly place anyone inside The Cube. He decides to enter The Cube to help Cassandra escape it. He distracts Dodd and enters the elevator, which contain only three buttons, UP (from those upstairs), MIDDLE (which is actually a place between UP and DOWN, and is pointing to their office), and DOWN (one of the entries and exits of The Cube). He selects DOWN, and enters the room.
Jax, one of the Cube's supervisors who monitor the employees, and two of his analysts arrive from "upstairs" to stop Eric from helping Cassandra. Despite their efforts to stop them, Eric and Cassandra make it to the exit room with the help of Dodd, who sabotages the control panels servicing The Cube, and swallows the main power coupler for the cameras inside the Cube, saying "you will have to take it out of me". Jax kills him with a knife, and cuts his stomach and gets the coupler. The sabotage reset the Cube and caused every trap to shut down, which Eric planned. He also informs Cassandra that they only have 10 minutes to escape before The Cube enters the "Reset Mode", which vaporizes every living thing in all of the rooms.
Once Eric and Cassandra reach an "exit room", Haskell catches them, now a hacked soldier who tries to capture them. They escape using a secret auxiliary exit just as The Cube enters "Reset Mode", which vaporizes Haskell. They escape in the lake and end up in the forest. However, soldiers searching for them have already arrived. Cassandra manages to escape, but Eric is shot by a dart and passes out.
Eric wakes up in a surgery room and confronts Jax, who reveals that Cassandra may have gotten away, but Eric had been found guilty of "high treason" and "sabotage" against "country and God". He has been sentenced to "two lifetimes" and will be implanted with a brain microchip. Jax claims Eric has already been convicted in a trial. Jax shows him his consent form and says he had been put in the Cube not as a victim, but as an observer, with his memory reprogrammed so he would have no memory about his past life. Eric dreams about Cassandra reuniting with her daughter and praising Eric as "a superhero". Eric is then given a lobotomy so he would have no emotion, and placed in The Cube. This time, he is the victim. His behavior is identical to Kazan, an autistic man from the first movie, suggesting that Kazan might have been lobotomized as well.