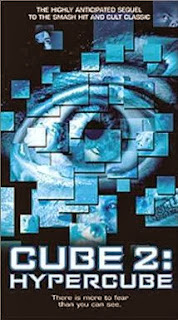 The films starts with a young woman named Becky (Greer Kent), showing to be trapped in the Cube. She enters another room, but unknown to her, the room has reversed gravity, as she is pulled up.
Some time later, a woman named Kate (Kari Matchett), detective Simon (Geraint Wyn Davies), a blind girl named Sasha (Grace Lynn Kung), engineer Jerry (Neil Crone), game developer Max (Matthew Ferguson), lawyer Julia (Lindsey Connell), and an elderly woman named Mrs. Paley (Barbara Gordon) trapped in brightly lit cubes, each with six panels on each side which are doors to other rooms. They come across Colonel Thomas Maguire (Bruce Gray), who says that they have to solve the code in order to leave the mysterious place. A wall begins to close in on the group. The group escapes while Thomas stays behind and handcuffs himself. They realize that the wall is non-physical and dangerous. Kate and Simon watch in horror as Thomas is disintegrated by the wall, the suitcase he was holding reduced to tatters. Later experiences around the cube reveal that gravity can operate in different directions in each room, while Mrs. Paley and Jerry realize that they may be in a tesseract. Kate begins to notice the numbers "60659" everywhere they go.
The group realizes that they are connected to Izon, a weapons industry. Mrs. Paley then opens a panel to reveal her and Simon being killed. Jerry thinks that it is a parallel universe, while Max and Julia think it is an optical illusion. Later, while the group are sleeping, Simon realizes that he is in the tesseract to look for Becky, a missing Izon worker. Meanwhile, Sasha, who has acute hearing, hears a noise and awakens everyone. The group finds a floating square in the middle of the room which initially grows into several shifting variations of a tesseract, before expanding into a lethal and rapidly spinning frame.
The group flees into another room, but Jerry is caught and dies after being pulled into the tesseract and disintegrated when the blades shred him all the way down to the atomic level. Kate remains to save Sasha, who is still trapped in the room, narrowly avoiding death as they group in one of the corners of the room where the tesseract can't reach, and eventually it disappears after not detecting any noticeable movement, yet Sasha and Kate are separated from the group. Simon starts to suspect that Mrs. Paley is an undercover spy, so he gags and ties her up, but crystal beams start protruding from the walls. Simon tries to save Mrs. Paley, but when he sees that there isn't enough time (and when the clinging Mrs. Paley refuses to release him) he stabs her with his knife. Max and Julia, disturbed that Simon killed Mrs. Paley, leave him. They start to have sex, but unbeknownst to them, they are in a speeding-time room, and they age prematurely until they turn into dessicated corpses floating in the air, still in mid-coitus. Simon, alone and hungry, goes insane. He encounters a parallel Jerry and the missing Becky, killing both of them.
Meanwhile, Kate finds grisly alternate realities in other rooms. Sasha tells Kate that time and space are distorted at where they are; the tesseract will implode and reality is collapsing. She then reveals that she is Alex Trusk, a computer hacker who is responsible for the creation of the tesseract. She also reveals that when she discovered that Izon was actually putting people inside the tesseract, she tried to stop their operation, but was pursued so she "fled into the only place they wouldn't follow." Kate, however, still believes that there is a way out. Kate finds Simon and stabs him in the eye after he grabs her. Simon then appears behind Alex, old and blind in one eye, proving Alex's time theory. Alex claims that they "are all dead", which causes Simon to snap her neck.
Kate finds that the tesseract is shrinking, and kills Simon with the knife. She looks at the numerous watch duplicates of Jerry's and realises that "60659" is the time that the tesseract will implode (6:06:59) and that she is there to take back Alex's necklace which was filled with confidential information on Izon. The hypercube starts wearing away, and Kate opens a panel in the bottom, revealing a black void. At 6:06:59, she jumps in just when the Hypercube implodes. Kate wakes up in the hands of Izon authorities in an unknown factory. She gives them the necklace and is executed by one of the Izon operatives. Izon authorities then report that "Phase 2 is terminated".