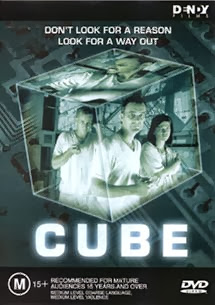 A man named Alderson (Julian Richings) awakens and finds himself in a cube-shaped room with a hatch in each wall and in the floor and ceiling. Opening some of the hatches, he finds passages to rooms that are identical except for their colors. He enters an orange room and, without warning, is sliced to pieces by a wire grill.
In another such room, five people - Quentin, Worth, Holloway, Rennes and Leaven - meet. None know where they are, how they got there, or why. Quentin, having almost been killed by one, informs them that some cubes contain traps. Assuming they are triggered by motion detectors, Rennes tests each by throwing his boot in first. Leaven notices numbers inscribed in the passageways between rooms. Quentin, a policeman, recognizes "the Wren" as an escape artist renowned for getting out of jails. After "booting" one room, Rennes enters but is sprayed by acid, which dissolves his face and kills him.
Quentin believes each person has a reason for being there. He is a police officer, Leaven is a mathematics student, Holloway a doctor and conspiracy theorist who thinks the "military industrial complex" is responsible for their predicament, while the surly Worth declines to talk about himself or his past actions. Leaven theorizes that any room marked with a prime number is a trap. They then find a mentally challenged man named Kazan, whom Holloway insists they bring along.
Quentin enters a supposedly safe room and is nearly killed by a razor-wire trap, disproving Leaven's theory. Tensions rise, and Quentin becomes irritated by Holloway's paranoia and liberalism, Kazan's childlike mentality, and Worth's reticence. He baits Worth into revealing himself. Worth admits that he knows about this place: he designed the Cube's outer shell. Worth insists that he knows nothing about the rest of the structure. He believes that it was ordered by a bureaucracy, its purpose lost over time; they are only imprisoned there because not using it would require the organization to admit that the Cube was a mistake, a waste of time and money. His knowledge of the outer shell's size allows Leaven to determine that there are 26 rooms to a side, 17,576 rooms in all. She guesses that the numbers indicate the Cartesian coordinates of the rooms. The group starts moving toward the nearest edge based on her theory.
Arriving near the edge, they find that each neighbouring room is trapped. Rather than backtrack, they decide to make their way silently through a blue colored room whose trap is activated by sound rather than by motion. Nearly everyone makes it through without incident, but Kazan makes a noise during Quentin's transit of the room and Quentin is almost impaled by spikes. Upon reaching safety, he threatens Kazan with violence.
They arrive at an edge room and find a wide, unlit gap between it and the outer shell. Holloway swings out to investigate, using a rope made from their clothes, but nearly falls when the Cube suddenly shakes. She climbs up and grabs Quentin's arm but he drops her to her death, telling the others that she slipped.
As they rest, Quentin tries to persuade Leaven to abandon the others with him. He makes a sexual advance but she rejects him with disgust, and he quickly becomes aggressive. When Worth intervenes, Quentin beats him and then throws him through the floor hatch. Worth laughs hysterically at what he finds — Rennes' corpse. The thought that they have been going around in circles is demoralizing, but then Worth realizes that they are not going in circles, the rooms are moving periodically.
Leaven deduces that traps are not tagged by prime numbers but by powers of prime numbers. Kazan is an autistic savant who can quickly do prime factorizations and thus identify the trapped rooms. Leaven determines that the numbers indicate the positions within the cube where each room rests between moves through the Cube. The room that connects to the "bridge" leading to the only door in the outer shell proves to be the one in which the group first woke up. The alignment they need will come in two moves.
Worth ambushes Quentin and leaves him behind during one move as they hurry to the cube adjoining the bridge. When they open the hatch, they are met by a bright white light (which is the only exit and entrance of the Cube). Worth decides to stay over Leaven's objections, saying there is nothing outside for him but "boundless human stupidity", but Leaven responds, "I can live with that." Bloodied Quentin appears and fatally stabs first Leaven, then Worth with a door handle, before going after Kazan. With the last of his strength, Worth grabs Quentin's leg, holding him long enough for Quentin to be ripped apart in the passageway as the bridge shifts. Worth then dies of his wounds, with a smile on his face. Kazan, now free, slowly walks into the bright light.