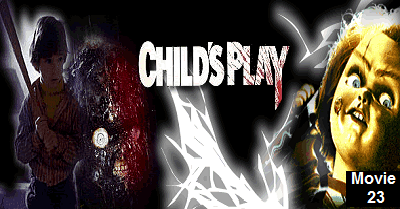 Charles Lee Ray (Brad Dourif) also known as the "Lakeshore Strangler" and "Chucky" is a serial killer and voodoo practitioner, who is being pursued by Mike Norris (Chris Sarandon), a homicide detective in the streets of Chicago in November 1988. Eddie Caputo (Neil Giuntoili) Charles's friend and driver betrays him by driving off without him after Charles gets shot in the leg as well as being caught by Jack Santos (Tommy Swerdlow), Mike's partner. In a toy shop Mike shoots Charles again. Discovering he is bleeding to death Charles swears revenge on him and Eddie, before transferring his soul by voodoo into a "Good-Guy" doll, which causes lightning. The lightning destroys the store but Mike survives and finds Charles's apparent dead body.
The next day widow and single mother Karen Barclay (Catherine Hicks) purchases the same doll from a peddler for her only son Andy (Alex Vincent) after he wanted a "Good-Guy" doll for his 6th birthday. That night Maggie Peterson (Dinah Manoff), Karen's co-worker and best friend is babysitting Andy as his mother had to work late. When Andy is fast asleep his doll "Chucky" now possessed by Charles toys with Maggie before causing her to fall from the kitchen window to her death below after she stopped him from getting updates on the news about Eddie. Karen returns home to see the police including Mike being in the apartment and is cross when Mike suspects Andy may have killed Maggie. Karen then becomes concerned after Andy claims Chucky is alive.
The next day Andy on Chucky's orders skips school and goes to another part of Chicago by train. When Andy is urinating Chucky invades Eddie's lair and turns off the pilot light in the oven. As a result Eddie dies after shooting the appliance with his gun. Mike again suspects Andy is a murderer and Andy is sent to a mental hospital by Dr. Ardmore (Jack Colvin) after he blames Chucky. That night Karen discovers the batteries that came with the doll meaning he should not be working without them. After threating to burn him Chucky comes to life and bites her before escaping.
Despite this Mike refuses to accept that Chucky is alive. Frustrated Karen decides to find the peddler and finds him near to where Eddie was killed. After the peddler nearly rapes her Mike saves her and demands from the peddler where he found the doll. After the peddler says he found it at the toy shop Mike drops off an angered Karen at her apartment. On his way home Mike crashes his car after Chucky tries to attack him. Mike cheats death and shoots at Chucky wounding him. Finally accepting Karen was right he meets her at Chucky's old lair and discover he learnt black magic from a witchdoctor named John. The duo decide to find him before Chucky does.
Chucky though finds John first at his apartment and demands to know why he got wounded. John claims he is becoming human and will be trapped in the doll the longer he spends in it. Chucky demands a way out and John refuses at first as Chucky used voodoo to his advantage. Chucky though attacks him via a voodoo doll and John gives in by saying he has to possess the first person he revealed that he was alive. Discovering the person is Andy, Chucky thrilled at the idea of being "six years old again" kills John by stabbing the doll and leaves. Before he dies John warns Karen that her son is in danger and Chucky can be killed by shooting him in the heart as it is almost "human".
At the mental hospital Andy sees Chucky and tries to warn Dr. Ardmore but his pleas are ignored. Chucky sneaks into the hospital and steals the key for Andy's cell but the boy escapes. After Dr. Ardmore catches him he is killed via electrocution by Chucky. Andy escapes and heads back home. At the hospital Karen and Mike discover Andy is gone and go back to the apartment.
Chucky follows Andy home and gets in via the fireplace and chases after Andy to possess him. He knocks him out with a bat but before he can possess him Karen throws him into the fireplace and burns him. Despite being burnt to a crisp, Chucky survives and is now charred. He continues to go after Andy and wounds Mike in the leg. Karen shoots him a few times and Chucky is shot to pieces. Despite this he manages to strangle Jack Santos but is shot in the heart and finally dies.
Believing nobody will be convinced of their experience, Andy, Karen, Mike, and Jack leave the apartment to an ambulance waiting outside.