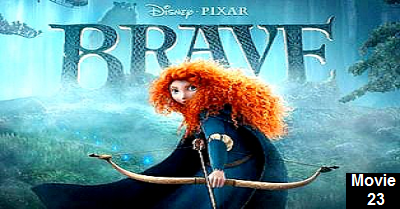 A young Princess named Merida of the clan Dunbroch is given a longbow by her father, King Fergus, for her birthday, to her mother Queen Elinor's dismay. While practicing, Merida ventures into the woods to fetch a stray arrow, where she encounters a will-o'-the-wisp. Soon afterwards, Mor'du, a giant demon-bear, attacks the family. Merida escapes on horseback with Elinor, while Fergus fights off the bear at the cost of his left leg. Eleven years later, Merida has become a free-spirited, headstrong sixteen-year-old with much younger identical triplet brothers, Hamish, Huburt, and Harris. Elinor informs her that she is to be betrothed to one of her father's allied clans, against her will. Reminding Merida of a legend about a prince who had ruined his own kingdom by pride and refusal to follow his father's wishes, Elinor warns her that failure to consent to the marriage could harm Dunbroch, but Merida is still unhappy with the arrangement.
Rival clans arrive with their firstborn sons to compete in the Highland Games for Merida's hand in marriage. Merida, twisting the rules, announces she is eligible to compete for her own hand as the first-born of Clan Dunbroch and defeats each of her suitors in an archery contest, shaming the other clans. Merida and Elinor argue, with Merida tearing the family tapestry and Elinor throwing Merida's longbow into the fire. Merida then storms out in tears and rides into the forest, where she follows the wisps to the hut of an elderly witch posing as a wood carver. After some bargaining, the witch agrees to give Merida an enchanted cake to change her mother's mind.
Merida returns to the castle and gives Elinor the cake, which magically transforms her into a black bear. Realizing that she has made matters worse for herself, Merida returns with Elinor, who still retains most of her human personality, to the witch's cottage but finds only a message left behind. They learn that unless Merida is able to "mend the bond torn by pride" before the second sunrise, the spell will become permanent. The two are led by the wisps to ancient ruins, where they encounter Mor'du, whom Merida discovers was once the power-mad prince in Elinor's legend, under a similar transformation spell. Merida vows to her mother that she will not let her become a wild animal like Mor'du, and theorizes that she can reverse the spell by repairing the torn tapestry.
At the castle, the clans are on the verge of war, but Merida interrupts their fighting and states that the children should be allowed to get married in their own time to whomever they choose. The clans agree, renewing and strengthening their friendships and breaking tradition. Merida then sneaks into the tapestry room with Elinor. Elinor, who is losing control of her human self, attacks Fergus, but suddenly regains her human consciousness and races out of the castle. Fergus, thinking that the queen was killed by Mor'du, pursues the bear with the other clans. With the help of her brothers, who have also eaten the enchanted cake and transformed into bear cubs, Merida rides after her father while simultaneously sewing up the tapestry. The clan members and Fergus capture Elinor, but Merida intervenes, just before Mor'du appears and attacks. A battle ensues, and just as Mor'du is about to kill Merida, Elinor fights off Mor'du and saves her, and a menhir falls and crushes Mor'du to death, releasing the prince's spirit. Before departing to the afterlife, he silently thanks Merida for finally freeing him from himself.
At the second sunrise, Merida realizes the true meaning of the witch's riddle, and reconciles with her mother. The queen is transformed back to her human form along with the triplets, and the family is happily reunited. A few days later, Merida and Elinor are working together to sew a new tapestry of Merida, and Elinor as a bear, when they are called to the docks to bid farewell to the other clan lords. They then ride their horses across Scotland together with a renewed mother-daughter bond.