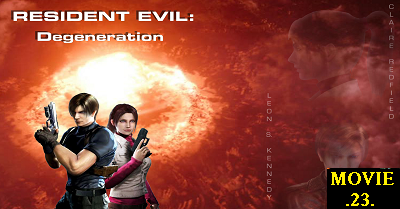 In 2005, the Harvardville Airport is under attack by a zombie infestation. Claire Redfield is now a member of TerraSave, an organization which handles search and rescue at chemical and biological attacks. Claire was on-site and coincidentally runs into U.S. Senator Ron Davis, who was trying to avoid protesters. Meanwhile, a passenger aircraft approaching the airport crashes due to a man infected with the T-virus, who caused an infestation on board. Unable to escape from the airport terminal, Claire, Rani and Davis, along with an airline stewardess, shut themselves in the VIP lounge and call for help. By nightfall, the airport has been locked down by the local Special Response Team and the United States Marine Corps, aiding evacuated survivors. Two officers Angela Miller and Greg Glenn, are joined by Leon S. Kennedy. Leon, Greg, and Miller manage to save the civilians, but Glenn is infected during their exfiltration, with the U.S. Marines clearing out the terminal.
Claire sees a convoy of trucks from the WilPharma Corporation arrive to administer the vaccines for the viral outbreak. Suddenly, the WilPharma trucks containing the vaccine are destroyed. Claire accompanies WilPharma chief researcher Frederic Downing to the WilPharma research facility for more vaccines. After a tour of the facility, Claire is shown a molecular-scale image of the G-virus. Downing, surprised by her anger, excuses himself and she is left alone in his office. Claire informs Leon about WilPharma's possession of the G-virus, and learns that he and Angela Miller have found the house of Curtis Miller, Angela's brother, burned down. Downing phones Claire to warn her that a man has just left the facility and that a time bomb has been activated. Claire catches a brief glimpse of Curtis Miller through a window, only for the bomb to detonate.
Leon and Angela arrive at WilPharma and split up. Leon regroups with Claire while Angela reunites with her brother. Curtis tells Angela that the government covered up some of the events in Raccoon City which kept his family from being saved. A squad of Marines storm the room. Curtis, having injected the G-virus, mutates and attacks the Marines. Leon saves Angela as the atrium garden begins to fall apart, with the wreckage crushing Curtis. Believing him to be dead, the surviving Marines head up the elevator to safety, Curtis however gets out of the wreckage and mutates further, climbing up the building and destroying the elevator. The WilPharma computer system then sets the building on fire in an attempt to avoid the T- and G-Virus' spreading. Angela and Leon jump into a pool of water to avoid being incinerated. After having shot a glass partition to avoid drowning, the two find themselves in an underground area. Meanwhile, Claire makes it to the command center on the topmost floor, doing whatever she can to halt a biohazard alarm and open the building. However, the detection of Curtis in the underground center causes another alarm, in which sections of the building are ejected to fall deep underground.
As Leon and Angela search for an escape route, Curtis attacks them, seeing Leon as a threat and Angela as a mate. Curtis manages to briefly regain control, telling Angela to run before losing himself again. As the sections are being ejected, Leon and Angela climb up wreckage, only to hang from a broken catwalk. About to fall, Curtis grabs hold of Angela's leg but is shot in the head by Leon, and falls to his death. The impact of Curtis with the bottom of the pit causes an eruption of fire, from which Leon and Angela are saved when a bulkhead closes just below them. In the aftermath of the crisis, Claire accuses Senator Davis of being part of the cover up and the Harvardville Airport incident. Leon reveals that Davis did not know anything, and Claire realizes that Downing engineered the outbreaks in the airport and the airliner, as well as the destruction of the vaccine, the bombing of the research building and the bio-terrorism incidents by selling T-virus samples. Meanwhile, Downing talks to General Grandé, a client eager to buy the T-virus, now that news reports have revealed its potential. Waiting for a contact to sell WilPharma information to, Downing mistakes a car containing Leon and Claire for his contact. He is arrested by Angela.
The next day Leon and Claire meet with a despondent Angela. Leon reveals that Downing confessed to the entire plot, and also reveals Downing's former position as an Umbrella researcher who stole samples of both viruses and escaped prior to the Raccoon City incident and created his current identity. Downing used his alias to sell the viruses to a list of potential customers while researching the vaccine. Angela then realizes that Curtis was being manipulated by Downing, but Claire notes that even though this does not clear Curtis's name, he had the same motives to prevent another disaster like Raccoon City as she, Leon, and Angela do.
Leon, Claire, and Angela go their separate ways. Meanwhile, news gets out that Davis has resigned from office over allegations of insider stock trading with WilPharma stocks. A newspaper draped over Davis' face reads "Tricell Offers to Purchase WilPharma". Davis' hand falls from the desk revealing him to be dead, and on his computer WilPharma files are being deleted, which when completed reveal a Tricell, Inc. insignia on his screen.
The film ends with Tricell employees in hazmat suits searching the underground ruins of the WilPharma research building, where they discover a fragment of Curtis's body infected with the G-virus, which they seal in a biohazard container.