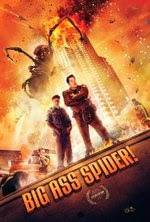 A film that’s simultaneously humble and ambitious, I had a good time with Big Ass Spider!. It’s a movie that sets out to elevate the terrain usually staked out for Asylum type productions and build something more enjoyable on it. In that regard, the film succeeds. Even though Spider‘s brand of humor and sub-genre aren’t necessarily my thing (though I did laugh a lot), I appreciated the wise decision to go the buddy-comedy route and actually stick with it – a rare choice for this kind of outing. It’s here that director Mike Mendez really sets his film apart.
Greg Grunberg plays Alex, a bumbling yet efficient exterminator. After being bitten by a brown recluse on the job, he’s taken to a hospital (where he really seizes upon the opportunity to flirt with the nurses). Soon after his arrival things begin to go awry. A mysterious corpse (housing a few guests) is wheeled in and, as they say, we’re off to the races. The hospital setting is pretty much ground zero for the first part of the film, and it’s there we meet most of our characters – chief among them the janitor Jose, played Lombardo Boyar (with Clare Kramer’s Lieutenant Brant a second place MVP).