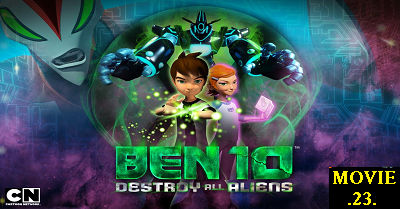 Taking place shortly after the events of the original Ben 10, Ben, Gwen and Grandpa Max spend their evenings fighting aliens on the streets of Bellwood. During a battle against a robotic tank, Ben as Upgrade and Gwen argue about the best way to defeat it, leading to Gwen using a magenta-colored glowing dismantling spell on the tank while Ben is attached. Unknown to the children, this leads to a malfunction in the Omnitrix.
Later, after a mishap in school where the Omnitrix accidentally teleports his homework, Ben is grounded by his parents and forced to stay home and do a history report. Ben attempts to work on the report before the Omnitrix teleports his laptop away as well. Shortly afterwards, Tetrax Shard arrives and tells Ben that Azmuth has asked to meet with him. They go to meet Azmuth but are attacked by an evil version of Waybig. Tetrax and Ben fight the alien, who is also teleported into the Omnitrix, though neither of them is aware of it. Tetrax decides to take Ben to meet Azmuth and activates a new function on the Omnitrix. Before he can explain this new ability, the ship is attacked and Ben is sucked out into the atmosphere, falling to the ground as Diamondhead. It is later revealed that the new ability prevents Ben from returning to human form when he times out, simply switching alien forms. Ben as Fourarms arrives at Stonehenge and is attacked by a Galvanic Mechamorph who demands to know about the alien that attacked Ben. Ben tries to explain, but the warrior only continues to attack and the pair carry their battle across the globe, destroying most of Stonehenge and nearly damaging Cristo Redentor in Rio de Janeiro and in Egypt before arriving back in Bellwood. Ben transforms into Grey Matter and manages to escape the Mechamorph.
Meanwhile, Gwen and Grandpa Max receive a call from Ben's parents Carl and Sandra informing them that Ben has escaped the house. They go in search of him, only to find Tetrax and discover that Azmuth's ship (earlier disguised as a semi truck) has crashed and was destroyed by the evil Waybig. They soon encounter Ben and Tetrax restores Ben's Omnitrix to normal just as the Mechamorph catches up to them. Gwen sees how the Omnitrix reacts after Ben returns to human form and deduces what has happened just as she, Ben, Tetrax and the Mechamorph are transported into the Omnitrix.
Inside, Ben and the Mechamorph continue to battle before being attacked by a swarm of Stinkflies just as Gwen and Tetrax are ambushed by a herd of Wildmutt. The four catch up with each other and Gwen explains what has happened and they realize that the evil Waybig is inside with them just as he resurfaces. The Mechamorph, revealed to be Azmuth's father, attacks the Waybig in revenge for killing his son while Gwen uses him to reverse the transportation and return them to Earth. Unfortunately, the Omnitrix malfunctions again and transforms Ben's parents into Wildmutt and Heatblast, causing Gwen to realize that the evil Waybig is Azmuth, himself. Leaving Grandpa Max and Tetrax to handle his parents, Ben and Gwen follow Azmuth's father and the evil Waybig to the park where Ben transforms into Waybig to subdue Azmuth while he and Gwen try to reverse the transformation. They soon convince Azmuth's father that his son is the very alien they are fighting and the three work together to fix the Omnitrix and return Azmuth to normal. Azmuth reprimands Ben and Gwen for their errors and releases his father from the Mechamorph armor.
Returning to Ben's house, Azmuth restores Ben's parents to normal, and repairs the Rust bucket before leaving with his own father. Ben's parents, having forgotten that they grounded Ben, tell him to enjoy his fishing trip with Grandpa Max and Gwen. Ben declines, having learned to be more responsible, and stays home to finish his history report. The movie ends with Ben, Gwen, and Grandpa Max on another road trip where they encounter Doctor Animo and the three prepare for another exciting battle.