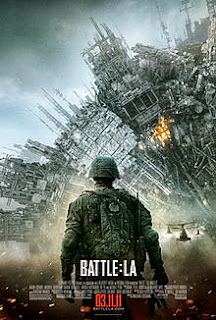 On August 12, 2011, large masses thought to be meteorites land in the oceans near several major coastal cities. The objects are discovered to be spacecraft containing hostile extraterrestrial life. Marines from Camp Pendleton arrive in Los Angeles, including SSgt. Michael Nantz (Aaron Eckhart), a 20-year veteran who had lost his squad during his tour in Iraq. Nantz was officially to begin his retirement; but because of the attack, is instead made the acting platoon sergeant for a Marine infantry platoon.
Under the command of 2nd Lt. William Martinez (Ramón Rodríguez), the platoon arrives at Santa Monica Airport, now a Forward Operating Base. The alien ground forces have no apparent air support, as the Air Force prepares to carpet bomb the Santa Monica area. The platoon is tasked with rescuing civilians from an LAPD police station in West Los Angeles before the bombing. As they advance through the city, they are ambushed and suffer casualties. A group of Army National Guard soldiers from the 40th Infantry Division, and an Air Force intelligence TSgt., Elena Santos (Michelle Rodriguez), having escaped hostile action that killed their comrades, now team up with the platoon. At the police station, the platoon finds five civilians: veterinarian Michele (Bridget Moynahan), children Hector Rincon (Bryce Cass), Kirsten (Joey King), Amy (Jadin Gould), and Hector's father Joe (Michael Peña). A helicopter arrives to evacuate the wounded Marines, but cannot rescue the civilians due to weight restrictions. As the helicopter takes off, it is destroyed by collision with an alien aircraft.
The Marines commandeer a city bus for evacuation. They also vivisect a wounded alien, and with the help of Michele, find a vulnerable spot in its torso. They also learn that the alien aircraft are remote-controlled drones that track human radio transmissions. Santos reveals that her original mission was to locate the aliens' central command center, believing that its destruction would deactivate the drones. On the I-10 freeway, the bus comes under attack. Because the off-ramp is destroyed, the Marines rappel the civilians off the freeway. Marines Stavrou (Gino Anthony Pesi) and Mottola (James Hiroyuki Liao) and the National Guard personnel are killed, while Rincon and Lt. Martinez are wounded. Martinez sacrifices himself to destroy an advancing enemy unit by detonating explosives inside the bus, leaving Nantz in command. The surviving Marines and civilians escape the bombing zone with 6 minutes to go. A news report speculates that the aliens are seeking Earth's water for fuel while attempting to colonize the planet and eradicate humans; ocean levels have already dropped several feet. The team waits for the bombing, but to their dismay nothing happens, and they depart. Arriving at the airport, the Marines discover that the aliens destroyed the FOB and the military is retreating from Los Angeles. Echo Company plans to escort the civilians to an alternative extraction point with a surviving LAV and an armored Humvee. Before they leave, Joe Rincon dies from his wounds, but the company later reaches the evacuation spot.
In midair, their chopper experiences a brief loss of power, possibly from concentrated multiple RF transmissions. Nantz theorizes that they were flying near a location occupied by the alien command center as it relays radio energy to its drones. He decides to recon the area alone, but his team insists on accompanying him. Underground, the Marines confirm the presence of a large alien vessel and return to the surface. Kerns radios in to request missiles, but is killed after sending the transmission. Nantz pinpoints the fired missiles via a laser designator towards the drone-protected command module, which finally crashes from a direct hit. The alien ground forces retreat, as their now uncontrolled drones fall to the ground helpless. At a Marine base, Nantz's team is greeted as heroes for their bravery and success. Despite orders to rest and recuperate, Nantz and his team re-arm and rejoin the rest of the military forces heading in for the retaking of Los Angeles as other countries wage similar military operations against the hostile species.