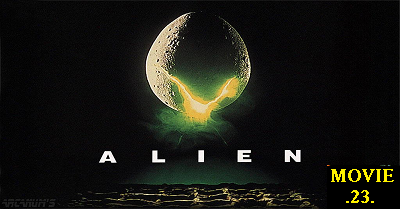 The commercial towing spaceship Nostromo, owned and operated by the Earth mega-corporation Weyland-Yutani, is on a return trip to Earth hauling a refinery and twenty million tons of mineral ore, with a seven-member crew in stasis. Detecting a transmission of unknown origin from a nearby planetoid, the ship's computer awakens the crew. Acting on standing orders from their corporate employers, they set out to investigate the transmission's source. The Nostromo lands on the planetoid, and Captain Dallas (Tom Skerritt), Executive Officer Kane (John Hurt), and Navigator Lambert (Veronica Cartwright) set out to investigate the signal, leaving Warrant Officer Ripley (Sigourney Weaver), Science Officer Ash (Ian Holm), and Engineers Brett (Harry Dean Stanton) and Parker (Yaphet Kotto) behind on the ship.
Dallas, Kane, and Lambert discover that the signal is coming from a derelict alien spacecraft. Inside they find the remains of a large alien creature whose ribs appear to have been broken outward from the inside. Meanwhile, Ripley determines that the transmission is actually some type of warning rather than a distress signal. Kane discovers a vast chamber containing thousands of eggs, one of which releases a creature that attaches to his face. Rendered unconscious, Kane is carried back to the Nostromo. Acting on improper orders from Dallas, Ash violates quarantine protocol by opening the airlock, allowing the exploratory team aboard. After an unsuccessful attempt by Ash to surgically remove the creature from Kane's face, the crew discover that the creature's blood contains a corrosive acid. The creature eventually detaches from Kane's face by itself and is later found dead. The Nostromo leaves the planet and resumes its trip to Earth.
Kane awakens from his ordeal with some memory loss but no other apparent ill effects. During the crew's final dinner before re-entering hypersleep, he chokes and convulses until an alien creature bursts from his chest, killing him and escaping into the ship. Lacking conventional weapons, the crew attempt to locate and capture the creature by fashioning motion trackers, electric prods, and flamethrowers. The Alien, which has now grown into an eight foot creature, attacks Brett and disappears with his body into an airshaft. Dallas enters the airshaft network intending to force the Alien into an airlock, but it ambushes him. When the others find no trace of Dallas, Lambert implores the remaining crew members to escape in the ship's shuttle, but Ripley, now in command, explains that the shuttle will not support four people, and that they should continue with Dallas' plan of cornering and flushing out the Alien.
Accessing the ship's computer, Ripley discovers that Ash has been ordered to return the Alien to the Nostromo's corporate employers even at the expense of the crew's lives. Ash attacks her, but Parker and Lambert intervene, decapitating and impaling Ash, revealing him to be an android. Before being destroyed, Ash predicts that the others will not survive. The remaining three crew members plan to arm the Nostromo's self-destruct mechanism and escape in the shuttle, but Parker and Lambert are killed by the Alien while gathering the necessary coolant supplies. Ripley initiates the self-destruct sequence herself and heads for the shuttle with the crew's cat, but finds the Alien blocking her way. She unsuccessfully attempts to abort the self-destruct, then returns to find the Alien gone and narrowly escapes in the shuttle as the Nostromo explodes.
As she prepares to enter stasis, Ripley discovers that the Alien has hidden aboard the shuttle. She puts on a spacesuit and opens the hatch, causing explosive decompression which forces the Alien to the open doorway. She propels it out by shooting it with a grappling hook, but the gun catches in the closing door, tethering the Alien to the shuttle. As it attempts to crawl into one of the engines, Ripley activates them and blasts the alien into space. She then puts herself and the cat into stasis and resumes the voyage back home.