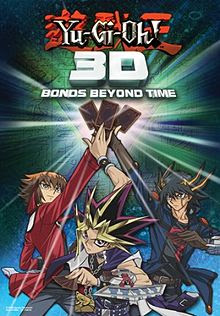 Description : The story takes place sometime during the beginning of the fourth season of Yu-Gi-Oh! 5D's, right before the events of the World Racing Grand Prix (WRGP) took place.
As Yusei Fudo ponders the current state of New Domino City, Jack Atlas and Crow Hogan come to cheer him up, with the idea of going for a ride on their Duel Runners. As they are riding, a mysterious Turbo Duelist called Paradox appears and challenges Yusei to a duel. However, when Yusei summons his Stardust Dragon, Paradox seals it inside a card and disappears with it. Yusei and his friends soon learn through computer research that Paradox has appeared during the era of Yugi Muto, using Stardust Dragon to cause a huge incident in the past, the effects of which cause New Domino City to start disappearing as time is altered. With the Signer's marks suddenly reacting, the Crimson Dragon appears, giving Yusei's Duel Runner the ability to travel through time.
Several years earlier, sometime after the GX era, Jaden Yuki (Judai Yuki in Japanese version) is attacked by powerful Malefic versions of stolen monster cards, including Yusei's Stardust Dragon in Venice, Italy. As Paradox prepares to finish off Jaden, Yusei and the Crimson Dragon arrive in his timeline and protect him. Jaden explains to Yusei how he had been pursuing Paradox who had stolen his friends' cards and is planning on messing up the timeline, agreeing to help Yusei chase after him. A few years earlier, Maximillion Pegasus is holding a duel tournament in Domino City, which Yugi Muto is attending with his grandpa. However, Paradox uses his newly acquired Malefic monsters to attack the event, killing Pegasus and Yugi's grandpa along with several bystanders, with only Yugi managing to survive. Yusei and Jaden arrive and take Yugi to half an hour before Paradox's attack, deducing that by killing Pegasus, Paradox would be able to end the existence of Duel Monsters, which would radically change the course of history.
As the group manage to scare off the bystanders, Paradox appears before them, explaining that he comes from a further future than Yusei's which is in ruin, believing the only way to fix it is to stop Duel Monsters from existing. Yusei, Yugi and Jaden disagree on the basis that their own timeline, and the people in it, will disappear as a result of the change in history. With Pegasus due to arrive in a short while, they challenge Paradox to a duel with the future at stake. Paradox activates his Malefic World and starts summoning his Malefic versions of the cards he has stolen from throughout time. Yusei, Yugi and Jaden work together to utilise their cards in order to protect themselves and beat back Paradox's monsters. As Paradox summons out one of his key monsters, Malefic Paradox Dragon, Yugi manages to destroy it, but then Paradox is able to summon out his ace monster, Malefic Truth Dragon. However, thanks to the group's combined teamwork, the group manage to reclaim Stardust Dragon and combine the power of Dark Magician, Elemental Hero Neos and Stardust Dragon, with a total of 10,000 attack points, to defeat Paradox, who disappears into the recesses of time, never to be seen again, but not before Paradox ponders the results of all of the events that he caused, and if it was really worth it. After the duel, Yusei, Jaden and Yugi say their goodbyes, hoping to meet again, before returning to their respective timelines, with Yusei's city back to normal.