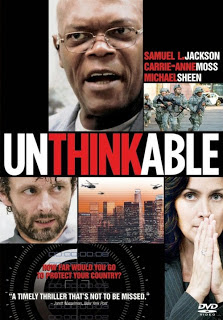 Description : The film begins with an American Muslim man and former Delta Force operator named Yusuf (Sheen), formerly named Younger, making a videotape. When FBI Special Agent Helen Brody (Moss) and her team see news bulletins looking for Yusuf, they launch an investigation, which is curtailed when they are summoned to a high school, which has been converted into a black site under military command. They are shown Yusuf's complete tape, where he threatens to detonate three nuclear bombs in separate U.S. cities if his demands are not met.

A special interrogator, "H" (Samuel L. Jackson), is brought in to force Yusuf to reveal the locations of the nuclear bombs. H quickly shows his capability and cruelty by chopping off one of Yusuf's fingers with a small hatchet. Horrified, Special Agent Brody attempts to put a stop to the measures. Her superiors make it clear that the potentially disastrous consequences necessitate these extreme measures. As the plot unfolds, H escalates his methods (with Brody as the "good cop"). Brody realizes that Yusuf anticipated that he would be tortured. Yusuf then makes his demands: he would like the President of the United States to announce a cessation of support for "puppet governments" and dictatorships in Muslim countries and a withdrawal of American troops from all Muslim countries. The group immediately dismisses the possibility of his demands being met, citing the United States' declared policy of not negotiating with terrorists.

When Brody accuses Yusuf of faking the bomb threat in order to make a point about the moral character of the United States government, he breaks down and agrees that it was all a ruse. He gives her an address to prove it. They find a room that matches the scene in the video tape and find evidence on the roof. A soldier removes a picture from an electrical switch which triggers a tremendous C-4 explosion at a nearby shopping mall visible from the roof. The explosion kills 53 people. Angry at the senseless deaths, Brody returns to Yusef and cuts his chest with a scalpel. Yusuf is unafraid and demands she cut him. He justifies the deaths in the shopping mall, stating that the Americans kill that many people every day. Yusuf says he allowed himself to be caught so he could face his oppressors.

H questions whether Yusef will reveal the bombs' location unless Yusuf's wife is found. When she is detained, H brings her in front of her husband and threatens to mutilate her in front of him. Brody and the others begin to take her away from the room in disgust. Out of desperation, H slashes her throat and she bleeds to death in front of Yusuf. Still without cooperation, H tells the soldiers to bring in Yusuf's two children, a young boy and a girl. Outside of Yusuf's hearing, he assures everyone that he will not harm the children. Yusef's children are brought in and H makes it clear that he will torture them if the locations of the bombs are not divulged. Yusuf breaks and gives three addresses (in New York, Los Angeles and Dallas), but H does not stop, forcing the others to intervene. Citing the amount of missing nuclear material Yusuf potentially had at his disposal (some 15–18 lbs. were reported missing, with about 4½ lbs. needed per device), H insists that Yusuf has not admitted anything about a hence-unreferenced fourth bomb. H points out that everything Yusuf has done so far has been planned meticulously. He knew the torture would most likely break him, and he would have been certain to plant a fourth bomb, just in case.

Here it becomes clear that the purpose of the preceding torture was not to break Yusuf, but rather to make it clear to him what would happen to his children if he did not cooperate. The official in charge of the operation demands that H bring Yusuf's children back in for further interrogation. H demands that Brody bring the children back in, because her decency will give him the moral approval that he needs to do the "unthinkable". When Brody refuses to retrieve the children for H, he unstraps Yusuf, sarcastically setting him free. The official draws his pistol and aims it at H to coerce him into further interrogation. Yusuf grabs the official's gun. He asks Brody to take care of his children and kills himself. Brody walks out of the building with Yusuf's children (This is the end of the original direct-to-DVD version).

An FBI bomb disposal team arrives at one of the disclosed locations and resets the timer to prevent the bomb from going off. As the FBI are celebrating however, behind a nearby crate, the originally unconfirmed fourth bomb's timer counts down to zero. The screen immediately cuts to black and the credits roll.