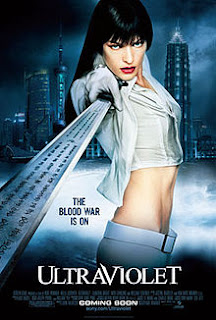 Description : Ultraviolet takes place in 2078, in the years following a global epidemic that causes vampire-like symptoms, including super-human strength and elongated canines. The infected "hemophages" die within twelve years after being infected. The Archministry, a militant medical group headed by Vice-Cardinal Ferdinand Daxus (Nick Chinlund), has taken control of the government and begun rounding up infected citizens and exterminating them in order to contain the virus.
Having been infected a decade earlier, Violet Song Jat Shariff (Milla Jovovich) has become a member of an underground resistance fighting to protect the hemophages from the government. Working with the resistance, Violet steals a weapon that was apparently created to exterminate all hemophages, only to discover that it is a young boy named "Six" (Cameron Bright). Rather than kill the child, Violet flees with the boy, believing that a cure for the disease can be reverse-engineered from the antigens before he dies from them.
She eventually converses with Daxus who tells her that the boy is his son, but she does not believe him. Instead she takes him to her friend Garth, who tells her the boy has no antigens and he has no value to anyone. He also tells her that the boy has a tracking device embedded in him ("so hot he's nearly radioactive"), that they can track him easily and he has only 8 hours to live. In the meantime, Nerva reveals to Violet that the antigens in Six's blood are actually deadly to humans. Furthermore, Daxus clarifies that the boy is his clone, his previous claim to her being a ruse to earn her sympathy. Since the hemophages are nearly exterminated, the Archministry intends to engineer a new plague to maintain its power. When he refuses to give her the cure, Violet escapes with Six and lets him spend his last moments at a playground. Daxus arrives and take Six's body for dissection.
Later, however, Violet realizes that Six may not actually be dead. She storms the Archministry and reaches a lab just as Daxus is about to begin the dissection. In the ensuing fight, Daxus reveals that he uses enhancements he gained from an accidental exposure to the hemophage virus to aid in his rise to power. Violet kills Daxus and leaves with Six's body. Six later wakes up, having been immunized by the hemophage virus in Violet's tears. It is theorized that Six's knowledge may be able to create a cure for her and the hemophages.