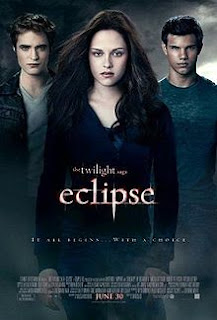 Description : In Seattle, not far from Forks, Victoria (Bryce Dallas Howard) attacks and bites Riley Biers (Xavier Samuel), in order to begin creating an army of newborns with him. Back in Forks, Edward Cullen (Robert Pattinson) and Bella Swan (Kristen Stewart) discuss the complications of becoming an immortal vampire. At 18 years old, one year older than the age Edward was when he became a vampire, Bella expresses her aversion to the idea of marrying so young, though Edward refuses to turn her into a vampire until they are married, his argument that she should have various human experiences she would otherwise miss. While Charlie Swan (Billy Burke) investigates the disappearance of Riley Biers, Edward suspects his disappearance was caused by the newborn vampires. Furthering his suspicions is Riley's intrusion into Bella's room.
Although Edward fears for her safety, Bella insists that Jacob Black (Taylor Lautner) and the rest of the werewolf pack would never harm her, but Edward is still not convinced. Bella goes to La Push to see Jacob, and returns home unharmed. During one of her visits, Jacob confesses that he is in love with Bella, and forcefully kisses her. Furious, she punches him and sprains her hand, and Edward later threatens Jacob and tells him to only kiss her if she asks him to. Bella even revokes the invitations of Jacob and his pack members to her graduation party, but when Jacob apologizes for his behavior, she forgives him.
Meanwhile, Alice (Ashley Greene) sees a vision that the newborn army is attacking Forks led by Riley Biers. Jacob, accompanied by Quil (Tyson Houseman) and Embry (Kiowa Gordon) overhear this, which leads to an alliance between the Cullens and Wolf pack. Later, the Cullens and the wolves agree to a meeting place and time to train and discuss strategy. During the training Jasper (Jackson Rathbone) explains to Bella that he was created by a vampire named Maria to control a newborn army. He hated his original existence and upon meeting Alice, joined the Cullens with her. Bella sees the true bond between a mated vampire pair and begins to understand Jasper better. Despite her reluctance to marry, Bella realizes that spending eternity with Edward is more important to her than anything else and agrees to marry him. Edward and Bella camp up in the mountains to hide Bella from the bloodthirsty newborns. During the night, Bella overhears a conversation between Edward and Jacob, in which they temporarily put aside their hatred towards each other. In the morning, Jacob overhears Edward and Bella discussing their engagement and storms off, angrily. Bella desperately asks him to kiss her, and she realizes that she has fallen in love with him. Edward finds out about the kiss but is not upset, as Bella says she loves him more than Jacob.
When Victoria appears, Edward kills her while Seth kills Riley. The Cullens and the Quileute wolves, meanwhile, destroy her "army", though Jacob is injured saving Leah Clearwater from a newborn. Several members of the vampire police, the Volturi, arrive to deal with the newborn army. They also see that the Cullens are guarding the newborn, Bree Tanner (Jodelle Ferland), who had refused to fight and surrendered to Carlisle. Jane (Dakota Fanning) tortures Bree to get information, then instructs Felix to kill her, despite the Cullens' efforts to spare her. When Jane notes that Caius will find it interesting that Bella is still human, Bella informs her that the date for her transformation has been set. Bella visits the injured Jacob to tell him that even though she is in love with him, she has chosen to be with Edward. Saddened by her choice, Jacob reluctantly agrees to stop trying to come between her and Edward.
Bella and Edward go to their meadow, where she tells him she has decided to do things his way: get married, make love, then be transformed into a vampire. She also explains that she never has been normal and never will be; she's felt out of place her entire life, but when she is in Edward's world she feels stronger and complete. At the end of the story they decide they need to tell Charlie about their engagement.