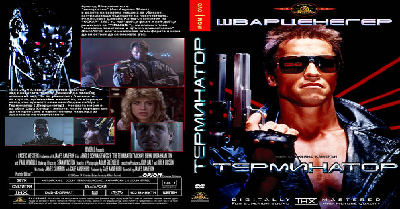 In 2029, artificially intelligent machines are attempting to exterminate what is left of the human race. Two beings from this era travel back in time to 1984 Los Angeles: One is a Terminator (Arnold Schwarzenegger), a cyborg assassin programmed to kill Sarah Connor (Linda Hamilton); the other is Kyle Reese (Michael Biehn), a human resistance fighter sent to protect her. He and the Terminator arrive naked, where they obtain weapons and clothing. After killing two other Sarah Connors listed in the telephone directory, the Terminator tracks its target to a nightclub. Kyle saves Sarah from the Terminator's attack and the two make an escape.
Kyle explains that in the near future an artificial intelligence defence network called Skynet will become self-aware and initiate a nuclear holocaust of mankind. Sarah's yet-unborn son John will rally the survivors and lead a resistance movement against Skynet and its army of machines. With the Resistance on the verge of victory, Skynet has sent a Terminator back in time to kill Sarah before John can be born, as a last-ditch effort to avert the formation of the Resistance. The Terminator is an emotionless and efficient killing machine with a powerful metal endoskeleton, but with an external layer of living tissue that makes it resemble a human being.
Kyle and Sarah are again attacked by the Terminator, leading to a car chase and their arrest. Kyle is questioned by criminal psychologist Dr. Silberman (Earl Boen) who concludes that he is paranoid and delusional. Sarah is also questioned by Lieutenant Traxler (Paul Winfield) and Detective Vukovich (Lance Henriksen) about the events that happened. The Terminator attacks the police station and kills many police officers including Vukovich in its attempt to locate Sarah but Sarah and Kyle manage to escape and seek refuge in a motel. Kyle confesses that he has long been in love with Sarah, having been given a photograph of her by her son John. Sarah reciprocates Kyle's feelings and they have sex.
The Terminator tracks them to the motel and Kyle and Sarah escape in a pickup truck. In the ensuing chase Kyle throws pipe bombs at the Terminator in an effort to destroy it. Kyle is wounded by the Terminator's gunfire; Sarah manages to knock the Terminator off its motorbike but subsequently loses control of the pickup truck and flips it over. As the Terminator gets up, it is struck by a gasoline tank truck dragging it a short distance. The Terminator hijacks the truck and resumes the chase. Kyle jams a pipe bomb in the tank truck's exhaust causing a massive explosion. The Terminator emerges from the burning truck and collapses. Kyle and Sarah embrace one another but the Terminator, with its flesh coating burned away, continues to pursue them into a factory. Kyle faces the Terminator by hitting it several times with a metal pipe but it knocks him down. Though dazed, he jams his final pipe bomb into its abdomen, causing an explosion which severely damages it, but Kyle himself is killed and Sarah is injured by a piece of shrapnel. Still partially functional, the Terminator tries to kill Sarah. She then destroys it by leading it into a hydraulic press. Sarah is later taken out of the factory by an ambulance as Kyle's body is taken away.
Several months later, a pregnant Sarah is traveling through Mexico. Along the way she records audio tapes which she intends to pass on to her unborn son, John. She debates whether to tell him that Kyle is his father. A boy takes a photograph of her which she purchases – it is the photograph that John will later give to Kyle. She drives on towards approaching storm clouds.

Thanks for watching The Terminator (1984 English Film) Full Movie