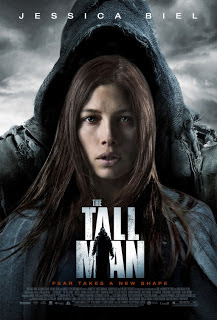 Description : Julia lives in a small town in Washington called Cold Rock. She is the town's local nurse, widowed by her husband, who was the town's doctor. Cold Rock was formerly a prosperous mining town, but has become poverty-stricken. During her day, Julia visits several families. Jenny and Carol live with their mother and her violent, alcoholic boyfriend, who has impregnated Carol. Despite this, their mother did not kick him out, drawing Julia's ire. Instead, she sends away Carol and her baby, whom Julia helped to deliver. Because of her rough life, Jenny is selectively mute, communicating through a journal she carries. She also sketches things she's seen, including "the tall man".

Julia returns to her large home on the outskirts of Cold Rock, which she shares with her son David and his nanny. She eats dinner, puts David to bed, and falls asleep on a couch. She awakes to a noise downstairs, followed by a loud radio sermon. She finds the nanny bound and gagged, then rushes to her son's bedroom, finding him gone. While in pursuit of what the viewer believes is "The Tall Man", it is gradually revealed that David is not her son at all, but rather one of the kidnapped children. The kidnapper is actually the real mother of the boy, attempting to take back her child. The rest of the town, skeptical of the mother's accusations, agree to give her a chance to prove her claims.

Julia, with the help of Jenny, pursues the mother, reacquires David, and hands him off to the Tall Man. Jenny begs her to send the Tall Man to take her, too. Julia initially refuses but then relents, cautioning her to remain silent. Julia then waits in her house. The police and FBI arrive, as does an angry mob. The nanny hangs herself, and Julia is taken to jail, where she is despised and threatened as a child killer. Julia admits to kidnapping and murdering the children, but the confession is later revealed to be a lie. Julia is part of an organization which "rescues" young children from bad homes and places them with good ones, in an attempt to break the cycle of poverty and abuse which passes from one generation to the next.

Soon after, Jenny watches her mother engage in a drunken fight with her boyfriend, before laughing with him over it. Disgusted, Jenny walks off into a nearby field, where she finds the Tall Man waiting for her—Julia's husband, who is not dead after all. He takes her to an empty house in a nearby city, providing her with new clothes. He then delivers her to a new family, with a new identity. The Tall Man refuses payment, saying that the organization faces massive risks to rescue each child, with Julia martyring herself to save the organization.

In Cold Rock, Jenny's birth mother grieves over her runaway daughter, the town continues to decline, and Julia sits in prison. The police have given up on finding the children. In comparison, Jenny lives in a beautiful home, where her art is encouraged and she has the best of everything. She has begun to talk and seems well-adjusted and happy. As she walks to an art class, she gives a voice-over expressing love and gratitude toward her three mothers: her birth mother, whom she misses; Julia, who gave her a chance at a new life; and her new mother, who is providing her with everything she could ever want. As she crosses a park, she sees David with his new family, which he now accepts as his own. (Jenny thinks he and the other younger ones have forgotten and do not recognize her, but the visual cues leave it decidedly open-ended.) Despite getting her wish of a better life, she sometimes wishes to return. Jenny's closing thoughts question society's implication that her new life is better.

Thanks for watching The Tall Man (2012 English Film) Full Movie