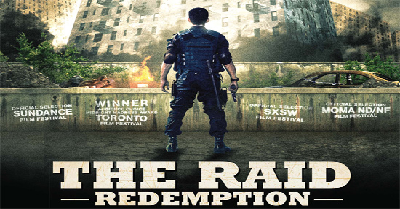 Opening at an apartment block in Jakarta's slums, a 20-man elite police squad arrives undetected, led by rookie Officer Rama, Sergeant Jaka, and Lieutenant Wahyu. The team intends to kill crime lord Tama Riyadi, who owns the block. After the team sweeps the first floors and subdues various criminal tenants, they detain a man delivering medicine to his sick wife, but Rama allows him to leave. Continuing undetected to the sixth floor, the team is spotted by a young lookout, who raises the alarm before he is shot and killed by Wahyu.
Tama calls in reinforcements, who successfully kill and maim a majority of the police. Cutting the lights, Tama announces over the PA system that the police are trapped on the sixth floor stairwell, and he will grant free permanent residence to those who kill the intruders. In the darkness, the team is soon ambushed by shooters from above and behind, and Jaka learns from Wahyu that the mission is not officially sanctioned by the force; nobody knows their location and no backup or reinforcements will arrive. Fleeing into an empty apartment, Bowo is shot and injured; to save him, Rama improvises an explosion that kills the pursuing tenants. With more antagonists approaching, the team splits into two groups covertly: Jaka, Wahyu, and Dagu retreat to the fifth floor, while Rama and Bowo ascend to the seventh.
Fighting to apartment of the tenant they earlier released, Rama and Bowo plead with him to help them; although his sick wife urges him to not get involved, he reluctantly agrees and hides the officers in a secret passage. A gang arrives and ransacks the man's apartment, but when they fail to find Rama and Bowo, they eventually leave. After giving medical attention to Bowo, Rama leaves him with the couple to search for Jaka's team, only to be captured by Andi, Tama's right hand man. It is then revealed Rama is Andi's estranged brother, and that Rama signed up for the mission to try and save Andi.
Concurrently, Jaka and his group are found by Mad Dog, Tama's ruthless henchman. Wahyu flees, and Jaka orders Dagu to follow Wahyu. Mad Dog captures Jaka, but, instead of shooting Jaka, Mad Dog challenges him to hand-to-hand combat. After Mad Dog defeats and kills Jaka, he drags the corpse to an elevator. Andi tells Rama to wait before leaving and meets up with Mad Dog. However, Tama has seen Andi talk to Rama on the numerous hidden cameras in the building. Realizing Andi's betrayal when he didn't return with a corpse, Tama stabs Andi in the hand and turns him over to Mad Dog.
Rama regroups with Wahyu and Dagu, who go on to fight through a narcotics lab, and they head for Tama on the 15th floor. Rama, finding Andi being beaten by Mad Dog, separates from Wahyu and Dagu to save him. Mad Dog allows him to free Andi and fights both brothers at once; after a long fight, he is overpowered and killed by the duo. Meanwhile, Wahyu and Dagu confront Tama, only for Wahyu to betray and kill Dagu. Wahyu takes Tama hostage with the intention of using him to escape, but Tama taunts Wahyu by revealing that Wahyu was set up; even if Wahyu escapes, he will be killed later. Wahyu kills Tama and attempts suicide, but he has no bullets left.
Andi uses his influence over the tenants to allow Rama to leave with Bowo and a detained Wahyu. Andi also hands over numerous blackmail recordings Tama made of corrupt officers taking bribes, hoping that Rama can use them to his benefit. Rama asks Andi to come home, but Andi refuses, due to his acclimation to his lifestyle. Before Rama leaves, Andi asserts he can protect Rama in his role as a criminal boss, but that Rama cannot do the same for him.

Thanks for watching The Raid: Redemption (2011 Indonesian Film) Full Movie