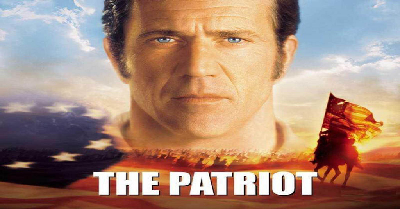 During the American Revolution in 1776, Benjamin Martin (Mel Gibson), a veteran of the French and Indian War and widower with seven children, is called to Charleston to vote in the South Carolina General Assembly on a levy supporting the Continental Army. Fearing war against Great Britain, Benjamin abstains. Captain James Wilkins (Adam Baldwin) votes against and joins the Loyalists. A supporting vote is nonetheless passed and against his father's wishes, Benjamin's eldest son Gabriel (Heath Ledger) joins the Continental Army.
Some years later, Charleston falls to the British and a wounded Gabriel returns home carrying dispatches. The Martins care for both British and American wounded from the nearby battle, before British Dragoons led by the ruthless Colonel William Tavington (Jason Isaacs) arrive and arrest Gabriel. When Benjamin's young son Thomas tries to free Gabriel, he is shot and killed by Tavington, who orders the Martins' house burned and wounded American regulars executed. After the British leave, Benjamin gives his next two eldest sons muskets and they ambush the British unit escorting a shackled Gabriel. Benjamin skillfully, yet brutally, kills many soldiers with his tomahawk. A British survivor tells Tavington of an almost unseen man rapidly killing the soldiers, earning Benjamin the moniker of the "Ghost". Benjamin and Gabriel resolve to fight the British, leaving the younger children in the care of Benjamin's sister-in-law, Charlotte (Joely Richardson). On their way to the Continental Army's camp, they witness the southern Continental Army under General Horatio Gates engaging the British Army. Having served with the British earlier in his life, Benjamin knows going muzzle to muzzle with the British is foolhardy. Sure enough, the Continentals are easily defeated and flee in disarray.
Benjamin meets with his former commanding officer Colonel Harry Burwell (Chris Cooper) and is given the rank of colonel to lead the local colonial militia due to his combat experience, tasked with keeping Lord Cornwallis's (Tom Wilkinson) British regiments pinned south through guerrilla warfare. French Major Jean Villeneuve (Tchéky Karyo) helps train the militia and promises more French aid. Benjamin's militia harass British supply lines, capture goods - including some of Cornwallis' belongings - and burn half the bridges and ferries leading to Charleston. Lord Cornwallis perceives these actions as uncivilized and blames Tavington for creating this reaction with his brutal tactics. Irritated at his lack of progress and insulted by Benjamin's clever ploy to free some of the captured militia, Cornwallis reluctantly allows Tavington to use whatever means necessary to stop the militia.
Tavington learns the identities of some of the militia members and proceeds to attack their families and burn their homes. Benjamin's family flees Charlotte's plantation as it is burned and settle on the coast in a Gullah settlement with former black slaves. There, Gabriel marries his betrothed Anne (Lisa Brenner) and Benjamin commits to Charlotte. Tavington's brigade, seeking Martin's secret hideout, rides into the town that supplies the militia. He assembles all the townspeople into the church, promising freedom for the location of the hideout. However, after the location is given the doors are barricaded, trapping the people inside. Tavington orders the church to be burned and kills all those inside. After discovering the tragedy, Gabriel races to attack Tavington's encampment. Gabriel initially appears to have mortally wounded him, however when Gabriel prepares to finish Tavington off, Tavington (having faked his injuries) stabs Gabriel through the heart before escaping. Benjamin arrives, only to have his son die in his arms.
Benjamin mourns deeply and briefly wavers in his commitment to continue fighting, but is resolved when reminded of his son's dedication to the cause by finding an American flag he sewed together personally. Martin's militia, along with a larger Continental Army regiment, confronts Cornwallis' regiment in a decisive battle. The redcoats seem to be defeating the patriots until Benjamin rallies the troops forward against the British lines and Tavington personally targets him. The two duel and Tavington's sword gains an upper hand over Martin's tomahawk. As Tavington prepares to finish him, Benjamin rises up with a musket, wounds him in the abdomen with the bayonet and delivers the coup de grâce, avenging his sons' deaths. The battle is a Continental victory and Cornwallis is forced to retreat. After many retreats, Cornwallis is besieged at Yorktown, Virginia where he surrenders to the surrounding Continental Army and the long-awaited French naval force. After the conflict ends, Benjamin returns with his family and discovers his militia men rebuilding his homestead, previously destroyed by the British on Tavington's orders.