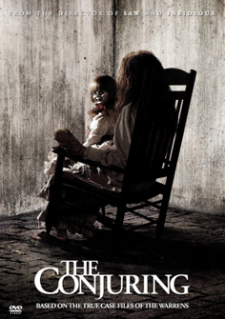 Description : In 1971, Carolyn and Roger Perron move into a dilapidated farmhouse in Harrisville, Rhode Island with their five daughters. During the first day, their move goes smoothly, though their dog, Sadie, refuses to enter the house and one of the daughters finds a boarded up entrance to a cellar.
The next morning, Carolyn wakes up with a mysterious bruise and finds Sadie lying dead outside the house. Over the next several days, various instances of paranormal disturbance occur, and Carolyn notices that all clocks stopped at exactly 3:07. The activity culminates one night while Roger is away in Florida. After hearing various clapping, giggling, and seeing the pictures shattered on the stairs, Carolyn is locked up in the cellar. Right after this, Christine is awakened and is horrified when she sees someone standing behind the door, before she is violently attacked.
Carolyn contacts noted paranormal investigators Ed and Lorraine Warren for help. The Warrens conduct an initial investigation and conclude that the house may require an exorcism, but they needed authorization from the Catholic Church and further evidence before that.
While researching the history of the house, Ed and Lorraine discover that the house once belonged to an accused witch, Bathsheba, who tried to sacrifice her children to the devil and killed herself in 1863 after cursing all who would take her land. The property was once 200+ acres but has since been divided up into smaller parcels. They find reports of numerous murders and suicides in houses that have since been built upon parcels that were once part of the property.
Ed and Lorraine return to the house in an attempt to gather evidence to receive authorization for an exorcism. One of the daughters, Cindy sleepwalks into her sister's room and reveals a secret passage behind a wardrobe. Lorraine enters the passage and falls through the floorboards into the cellar, where she sees the spirits of people whom Bathsheba has possessed. All are mothers whom Bathsheba used to kill their children. Another of the Perron children, Nancy, is violently attacked and dragged along the floor by an unseen force.
While the Perron family takes refuge at a hotel and Ed and Lorraine take their evidence to the Church to organize an exorcism, their daughter is attacked in their own home by the spirits from the Perron house.
Carolyn, who was earlier possessed by the spirit of Bathsheba, takes two of her daughters, Christine and April, and drives back to the house. Ed, Lorraine, two of their assistants and Roger rush to the house where they find Carolyn trying to stab Christine. After subduing Carolyn, Ed decides to perform the exorcism himself, though Carolyn escapes and again attempts to kill her other daughter, April. Lorraine is able to temporarily distract the possessed Carolyn from killing her daughter by reminding her of a special memory she shared with her family, allowing Ed to complete the exorcism, saving Carolyn and her daughter.


Thanks for watching The Conjuring (2013 English Film) Full Movie