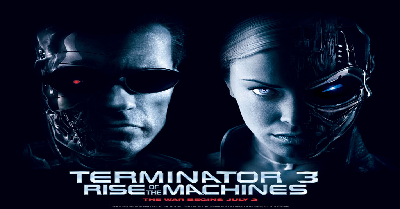 For nine years, John Connor (Nick Stahl) has been living off-the-grid in Los Angeles. Although Judgment Day did not occur on August 29, 1997, John does not believe that the expected war between humans and Skynet has been averted. Unable to locate John, Skynet sends a new model of Terminator, the T-X (Kristanna Loken), back to July 24, 2004, to kill John's future lieutenants in the Resistance. A more advanced model than previous Terminators, the T-X has an endoskeleton with built-in weaponry, a liquid metal exterior similar to the T-1000, and the ability to control other machines. The Resistance sends a reprogrammed T-850 model 101 Terminator (Arnold Schwarzenegger) back in time to protect the T-X's targets, including Kate Brewster (Claire Danes) and John.
The T-X locates John and Kate at an animal hospital and begins to chase them. The Terminator saves them after a battle and the three visit the mausoleum of Sarah Connor, who died of leukemia some years before. Inside the vault they find a weapons cache left by Sarah's compatriots as a backup in the event that Judgment Day was not averted. The T-X and police arrive and begin a gun battle, but John, Kate, and the Terminator steal a hearse and escape. The Terminator has been programmed to take John and Kate to a safe location so that they may survive Judgment Day, set to occur in a few hours, but John instead wants to avert Skynet from ever being activated. The Terminator reveals that in the future, John and Kate were married, and that Kate had reprogrammed him and sent him back after the T-850 had successfully assassinated John in 2032.
After the destruction of Cyberdyne Systems in 1995, the United States Air Force purchased the company and took over the Skynet project, and it is being headed by Kate's father, Lieutenant General Robert Brewster (David Andrews). However, they arrive too late to stop him from activating Skynet in an attempt to thwart the spread of a powerful computer virus in their systems (unaware the virus actually is Skynet, trying to take over the global computer network). Skynet assumes control of the military's defense network just as the T-X arrives, using various weapons systems to try and eliminate John and Kate. John asks the dying General for the location of Skynet's system core, hoping to still stop Judgment Day, and is instructed to go to Crystal Peak, a military base built into the Sierra Nevada mountains.
Before John and Kate can escape by plane, the T-X takes control of the Terminator, and it attacks them. It is able to override its programming and shut itself down before it can kill John. As John and Kate arrive at Crystal Peak they are attacked by the T-X, but a rebooted Terminator crashes a helicopter into it. Even with its legs severed, the T-X continues to pursue John and Kate, but the Terminator traps it under a blast door and detonates its last remaining hydrogen fuel cell in the T-X's mouth, destroying them both. John and Kate discover that Crystal Peak does not house Skynet's core, but is rather a Cold War-era fallout shelter for high-ranking government officials. General Brewster sent them there to protect them from the impending nuclear holocaust initiated by Skynet. Skynet in fact does not have a core but instead exists as software in cyberspace running on computers all over the world, making it effectively impossible to shut down. It begins a series of nuclear attacks on various cities, commencing Judgment Day. Soon after the attacks, the equipment at Crystal Peak picks up transmissions from amateur radio operators and Montana's civil defense, to which John responds, officially assuming leadership.

Thanks for watching Terminator 3: Rise of the Machines (2003 English Film) Full Movie