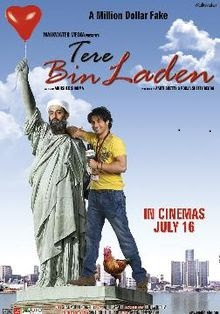 Description : Ali Hassan (Ali Zafar) is a reporter with Danka TV, a downmarket local TV channel in Karachi, Pakistan. He is keen to migrate to the US for a better life and wants to work for an American news channel. He gets a chance to fly to the USA, but ruins it on board while filming his own audition. He recites the words "Hijack" and "Bomb" too many times; thus scaring his fellow on board passengers and flight crew members. As soon as he reaches the USA, he is deported immediately. Furthermore, because of this incident his visa application is refused six times in seven years. While covering a local event for his channel, he comes across an Osama Bin Laden look-alike, Noora (Pradhuman Singh), and hits upon an idea to make a fake Osama tape. He manages to convince his assistant Gul (Nikhil Ratnaparkhi) about the merits of his plan. With help from his travel agent's assistant Zoya (Sugandha Garg) and a local radio jockey Quereshi (Rahul Singh), he is able to make the tape by tricking Noora into unknowingly posing as Bin Laden. He then sells the tape to the owner of his channel, hoping to raise money for a new false identity, a new passport and a renewed attempt at getting the elusive US visa. However, the gravity of their action strikes them when the US Government takes the tape seriously and gets involved, as do the Pakistani intelligence agencies. Noora too comes to know about the trick played upon him and goes into a hiding spot in his house.

Ali decides to diffuse the situation by making another tape in which Osama would be declaring ceasefire with US. He manages to convince Noora and Qureshi. During the shooting of the tape in Danka TV studio, Noora unwittingly detonates a grenade, which kills his beloved prize rooster. Depressed, Noora runs away from the location with the Osama-makeup still on him, forcing Ali and his team to follow suit. They manage to get hold of Noora and try to convince him for another shoot. Meanwhile, the FBI team, led by Ted (Barry John) and Usman(Chinmay Mandlekar), head of the Pakistani intelligence agency track down the location of Ali and his team and with their help, the police arrests Noora, Ali and his team. Ted is delirious that he could at last catch Osama bin Laden. However, during the interrogation, the truth is revealed and to save Ted's face, Ali convinces him about his idea of making a tape of Osama declaring ceasefire. The film ends with US accepting the offer of ceasefire and Ted getting elected as Defence Secretary. Ali is at last able to make it to the US and Noora too changes his lifestyle, marries Zoya and helps her with the daily routine in her beauty parlor.