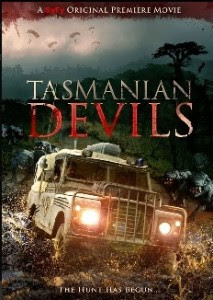 Description : 've had a bit of a complicated relationship with SyFy Channel Originals since starting this blog. On the one hand, I can't escape the widely accepted fact that most of them are simply self evidently terrible. And yet, much like the Asylum which often contributes films to the network as well, sometimes I find a glimmer of something watchable, or even downright entertaining in these schlocky weekly monster mashes. Until today, I could not point to a SyFy Original Movie that I absolutely, unequivocally loved, enough to suggest that it could or should have been a feature film. That is, until I finally sat down and watched one that's been in my queue for a while now called Tasmanian Devils.

Tasmanian Devils follows a group of hapless base jumpers and a trio of park rangers in the Australian Outback who find themselves fending off a sextet of atavistic hellhounds after one of them inadvertently triggers a supernatural alarm system. The movie starts out just like any Syfy Original, with characters that are pretty annoying right of the bat, in this case Whoo!ing at anything and everything on their way to their very illegal and unnecessarily dangerous past time, and in the case of the rangers, some nearly incomprehensible accents. I was settling in for a bad night until about the ten minute mark or so when we get our first kill, which was just creatively gory enough to hint at something just a tad bit better than the usual.

The movie only got better from here, escalating the carnage and bloodshed with a sense of style and love for the craft of schlocky monster movie making that is rarely seen on this network or ever so much anymore. This movie is the movie I would make if I was given a relatively small budget and told to make a horror movie about Australian wildlife run amok. The sensibility is right out of the 80's with the kind of over the top and creatively staged kills reminiscent of early Peter Jackson if he had worked with an even smaller budget then he did in those days. The titular Devils appear at first just to be chintzy CGI grey blobs, but their jerky movements and the way they are utilized suggest a clear nod to the Gozer Dogs from Ghostbusters, and even the original Evil Dead and its sequels are paid homage with several POV shots through the woods, and a McGuyver-ed flamethrower that looks absolutely like something Ash might build if his chainsaw somehow ever ran out of gas.

The Evil Dead references are apt not only in the specific visual cues, but in the general sense that this movie is easily The Evil Dead of Syfy Channel Original Movies. Like none before it that I have yet seen, it presents its incredibly silly opening premise with such gusto and ingenuity that it instantly wins you over and obliterates twenty or so years of bias against this company's productions. This movie is so good, it makes me want to watch other SyFy movies to see if there are any comparably good ones that I've missed. That alone is an accomplishment. I mentioned the kills before, and one of the things that made them so fun is that they actually made the characters likable before they killed them. Seriously, characters you like, in tense situations that actually feel tense...in a Syfy movie!

All of that, and I didn't even have time to mention that freaking Winnie from The Wonder Years is the Tasmanian Devil monster fighting lead, and is as awesome as that should be. There are so many satisfying moments in this movie that it is easy to forget the low budget despite how cheesy everything looks. Everything about the movie that at the outset made me believe it would be just another Syfy crapfest eventually evolved into something great. Not just good or watchable mind you, but genuinely great. I have a couple of other recent and not so recent Syfy movies in my queue that I've been either meaning to get to or deliberately putting off for the same fears I had going into this one, but Tasmanian Devils has convinced me to bite the bullet and see where these movies are going. Join me in the coming days and weeks to see if I find any comparable to this one.

Though for the record, one of them has Eric Estrada fighting a Chupacabra, so I'm not really holding out too much hope for that