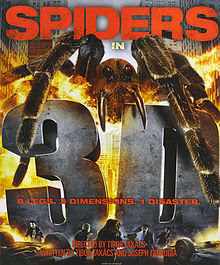 Description : A debris from the destroyed space station (where large mutant spiders were being experimented) fell into Earth, crashing in the tunnel of a subway station. As the film progresses, the spiders which where included in the fallen debris, started building up their colony as they also grew bigger. Jason, together with his ex-wife Rachel tries to save their daughter who is stranded in their block which is now being attacked by the mutant spiders. It is soon revealed that the military was the one who created the spiders for their weaponry. In the end, the queen spider was killed by Jason by crashing a train into it. But as the final scene slowly fades, another mutant spider is seen, and the film ends.