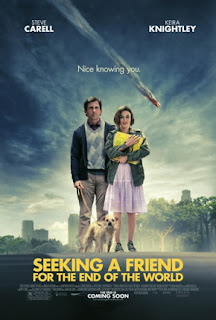 Description : The film opens with an announcement that a 70-mile-wide asteroid named Matilda is on a collision course with Earth and that the space shuttle Deliverance has failed on a mission to destroy it. The world has three weeks until impact, at which time all of humanity will be wiped out. Dodge Petersen (Steve Carell) and his wife Linda (played by his real wife Nancy Carell) listen to the broadcast from the side of the road. After Dodge has a disinterested response to this news, Linda looks at him in abject disgust and flees the vehicle without saying a word to him.

Dodge returns to his near-empty New York City workplace the next day, where he sells insurance. While everyone around him has reacted differently—from suicide to constant drugs to guilt-free sex—Dodge's life has not changed at all. Even his housekeeper, Elsa, continues to show up and clean his apartment despite Dodge's insistence that there is no further need to do so. He does not stop going into his meaningless job until one of his friends gives in to despair and leaps to his death by crashing into Dodge's parked car.

After attending a friend's wild party, where he passes on having sex or trying drugs for himself, Dodge returns home to reminisce about his high school sweetheart, Olivia, when he notices his neighbor Penny (Keira Knightley) crying on the fire escape. She admits to him that she has just ended a relationship with her boyfriend Owen (Adam Brody) for making her miss her last opportunity to see her family in England. Returning to her apartment, Penny gives Dodge three years' worth of his mail that was incorrectly delivered to her, but which she kept forgetting to hand over, and in the process unknowingly tells him that his wife was having an affair.

Dodge storms off into the night, guzzling codeine-laced cough syrup and window cleaner in an attempt to kill himself. The next morning, however, he regains consciousness with a note on his sweater—reading "Sorry"—and a dog tethered to his foot. He takes the dog, which he names Sorry, home and opens the old mail Penny had been holding. Dodge is surprised to discover a letter from his high school sweetheart, Olivia, dated three months earlier. The letter explains why she left him and what has happened in her life, concluding with the admission that he was "the love of her life". On the same night, a riot breaks out on his block. Abandoning Owen amidst the rioters, Dodge explains to Penny that he might know someone who could fly her to England if she promises to help him find Olivia first. She agrees and the two set off for Dodge's hometown in Delaware.

After running out of gas in New Jersey, Dodge and Penny hitch a ride with a sympathetic driver, Glenn, in a pick-up (William Petersen) who regales them with his life story. During a pit stop, the driver confronts Dodge, asking him how he "plans to do it". The driver makes light of Dodge's confusion, explaining that after he was diagnosed with terminal cancer, he had hired an assassin to have himself killed. At that exact moment, he is gunned down by the hit man, who high-tails it down the road in a getaway car. After a comedic scene of burying the driver only to realize the truck keys are buried along with him, unburying and then re-burying him, Dodge and Penny continue on their quest, stopping along the way at a popular restaurant called Friendsy's. After Penny playfully announces to the waitress (Gillian Jacobs) that they are there to celebrate Dodge's birthday, a frenzy of kissing and drinking between several staff and guests breaks out. Penny and Dodge leave just before an orgy breaks out, and swept away in the spontaneity of the moment, the two have sex in the pick-up truck. They are flagged for speeding by a thoughtless police officer who throws them in jail and impounds their car, although a kindly older cop sets them free and says he will drive them as far as Camden, New Jersey.

Later, in Camden, Dodge and Penny meet Speck (Derek Luke), a man from Penny's past who clearly appears prepared for the apocalypse. Speck reveals that he has a working satellite phone in his end-of-days bunker, and gladly lets Penny contact her family. After convincing him to loan them one of his fleet of Smart cars, Penny and Dodge finally track down Olivia's whereabouts. Dodge exits the vehicle and starts toward the door, much to Penny's disappointment. A short time later he returns, revealing that he had left a note but ultimately made no attempt to meet face-to-face with Olivia. When Penny presses him for an explanation, he is adamant about not explaining himself.

After stumbling across a mass baptism at the ocean, Dodge and Penny spend the rest of the afternoon quickly falling for each other, their emotions heightened by the apocalyptic circumstances. As dusk approaches, they end up in Somerset, where they pay a visit to Dodge's estranged father Frank (Martin Sheen). Their reunion leads to arguing but eventually, they reconcile and the three bond over personal time and dinner. After Penny falls asleep, Dodge carries her outside and it becomes apparent that the pilot he mentioned earlier is none other than his father, who is waiting for them in his airplane. Dodge gently but reluctantly places her in the passenger side of the small two-seater, whispering that she is the love of his life and at the same time knowing that this is the last time he will ever see her. He then nods to his father and watches as the plane flies away.

Dodge returns home, and discovers a post-it-note stuck to the door of his apartment. It is from Karen Amalfi, a lady he had met at a party earlier in the movie. Upon entering his apartment, Dodge finds Elsa once again cleaning his apartment. He scolds her, insisting that she should go and spend what time is left with her family, but in the end when she seems greatly disappointed, he tells her that he will see her next Thursday, as usual. He turns on the television, only to discover that Matilda is due to arrive one week earlier than expected. With only sixteen hours left, Dodge goes to Penny's apartment with Sorry and listens to her records until the power goes out. In the dark, he lights candles when suddenly Penny appears in the doorway of the living room. Having told his father to turn around, she asks how he could have possibly left her. He admits that it was the stupidest thing he'd ever done, and the two share one final, tearful reunion.

Shortly after, they lie in bed with each other and they begin to talk of how things might have been had they known each other sooner. Penny is scared to think that in only short moments all of earth will cease to exist, so Dodge calms her by asking all about where she grew up. Penny tensely tells him of her childhood with her brothers and late sister when they begin to hear the deep booms off in the distance of Matilda's collision with Earth. Penny panics, telling him that she thought they could have saved each other, but Dodge assures her they did. Their final moments are spent smiling as a sudden light appears behind Penny in the background, which rapidly grows brighter and brighter until it starts to envelop them, at which point it becomes a white fade as the film ends.