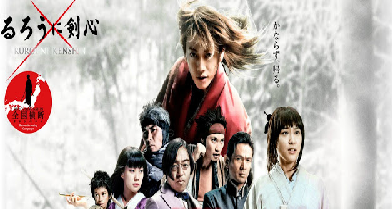 As the Imperialist forces celebrated their victory in the Battle of Toba-Fushimi, the participant Hitokiri Battōsai walks away from the battlefield, abandoning his sword. But, the Battōsai's old katana is not left alone. It is claimed by one of the fallen, Udo Jin-e.
A decade later, Saitō Hajime and his fellow policemen investigate the murder of an undercover cop supposedly by the hands of the Battōsai. But, Saitō is not convinced and suspects Takeda Kanryū, a wealthy, but cruel businessman.
Meanwhile, the former Hitokiri Battōsai (now calling himself Himura Kenshin) arrives in Tokyo. While roaming its streets, he meets Kamiya Kaoru, the owner of her late father's Kendo school. With her dojo's name smeared by one bearing the name of Battōsai, she attacks him believing him to be the famed killer, but is proven wrong when Kenshin reveals he only carries a sakabatō (逆刃刀?, "reverse-blade sword").
Elsewhere, a woman Takani Megumi forced to make opium for Takeda Kanryū, escapes and turns to the police for a safe haven after witnessing the deaths of the other opium makers. However, Udō Jin-e, under the service of Kanryū, hunts her down, slaying everyone in the police station. Luckily, she escapes in the ensuing chaos.
Kaoru crosses paths with Jin-e, the actual perpetrator for killing under her dojo's style of swordsmanship. Utterly no match for him, she is injured in the fight, but Kenshin appears out of nowhere and saves her. Jin-e immediately realizes Kenshin's hidden identity as the true Battōsai, before a swarm of policemen rush onto the scene, giving Kenshin and Kaoru a chance to flee. Kaoru leads Kenshin to her dojo where they would be safe.
Next, a group of thugs under Takeda Kanryū attempt to take over the dojo. After revealing his identity as the former Battōsai, Kenshin beats down the entire gang without killing a single one before the police arrive. Kenshin is arrested and imprisoned for possession of a sword. Soon, Saitō recognizes him and releases him. After his release, he is greeted by Kaoru who knows Kenshin is not the Battōsai who had defamed her dojo and takes him back to the dojo. Kenshin afterward moves in with Kaoru and her only student, the boy Myōjin Yahiko.
Still running on the streets for her life, Megumi runs into Yahiko who helps hide her and brings her to the dojo where she is introduced to everyone. Kaoru treats everyone to a dinner with meat only to have the occasion spoiled by Kanryū coming and offering to hire Kenshin, who humbly declines. Here, he is challenged by Sagara Sanosuke for the job and they leave the establishment to fight.
Later that evening, Jin-e goes on a killing spree leaving many corpses for the police to find the following day. Kenshin witnesses the horror, as well as a woman mourning the death of her lover. This invokes a memory for Kenshin from his years as an assassin when he witnessed a woman mourning a man that he had killed, a sword fight that left a scar on his face. Later that night, a masked man working for Kanryū warns Megumi of coming dangers.
The next day the people around the dojo fall ill from rat poison contaminating the community wells. Megumi suspects it's Kanryū's doing and helps by providing medication for the victims. Angry at Kanryū, Megumi attempts to kill him, but fails and is, instead, held hostage by the wealthy drug-dealer. Besting all his men, Kenshin and Sanosuke attack Kanryū's mansion in hopes of rescuing Megumi. Saitō assists them to subdue Kanryū, who is armed with a gatling gun. They rescue Megumi, but discover that Jin-e, the fake Battōsai and Kanryū's man, has kidnapped Kaoru.
Kenshin pursues Jin-e. To further provoke Kenshin, Jin-e uses a special technique that paralyzes Kaoru's lungs and can only be undone with his death. Kenshin critically injures Jin-e by shattering his elbow with his scabbard. Before Kenshin could land the killing blow, Kaoru overcomes the paralysis and stops Kenshin from killing Jin-e. Jin-e commits suicide, telling Kenshin before his last breath that he who lives by the sword must die by the sword, a re-occuring theme, counter to Kenshin's vow never to kill again.
Kenshin, tired and wounded, carries the unconscious Kaoru back to the dojo. They rest, in the care of Megumi and Yahiko. Upon waking up, Kaoru does not see Kenshin and goes in search for him. She finds him carrying back some vegetables, and is relieved of her fear that he may have left permanently.