Pirates of the Caribbean: On Stranger Tides (2011 English Film) 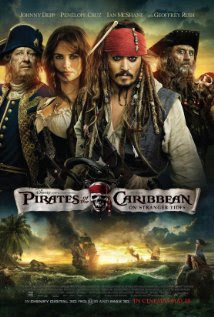 Description : After a failed attempt to rescue his first mate, Joshamee Gibbs (Kevin McNally) in London, Captain Jack Sparrow (Johnny Depp) is brought before King George II (Richard Griffiths), who wants Jack to guide an expedition to the Fountain of Youth before the Spanish locate it. Heading the expedition is Jack's old nemesis, Captain Hector Barbossa (Geoffrey Rush), now a privateer in service to the Royal Navy after losing his leg and ship, the Black Pearl.
Jack escapes, but his father, Captain Teague (Keith Richards), finds him and warns Jack about the Fountain's tests. He also reveals that someone is impersonating Jack. The impostor is Angelica (Penélope Cruz), Jack's former lover and the daughter of the ruthless pirate Blackbeard (Ian McShane), who practices voodoo magic and wields a magical sword that controls his ship.
Jack is taken aboard Blackbeard's ship, the Queen Anne's Revenge, and forced to lead the way to the Fountain and find two silver chalices that once belonged to Juan Ponce de León, both believed to be aboard his lost ship. The Fountain's water must be drunk simultaneously from the two chalices. The person drinking from the chalice containing a mermaid's tear has their life extended, while the other person dies, their life drained from their body and their remaining years 'donated' to the other. Meanwhile, Gibbs narrowly escapes execution by memorizing and destroying Jack's map, forcing Barbossa to spare him so he could navigate to the Fountain.
Blackbeard seeks the Fountain's power to circumvent his predestined fatal encounter with "a one-legged man," (Barbossa) and sets a course for Whitecap Bay. There they are attacked by a vicious horde of mermaids, but Blackbeard captures one (Àstrid Bergès-Frisbey). Philip Swift (Sam Claflin), a captive missionary, falls in love with the mermaid and names her Syrena. Blackbeard then sends Jack to retrieve the chalices from de León's ship.
When Jack finds the grounded, decaying vessel, Barbossa is waiting inside and the Spanish are in possession of the chalices. However, Barbossa only seeks revenge against Blackbeard for attacking the Black Pearl, which forced Barbossa to amputate his own leg to escape. He and Jack join forces to defeat Blackbeard, then head to the nearby Spanish camp to steal the chalices. Meanwhile, Syrena, reciprocating Philip's love, is tricked into shedding a tear which Blackbeard collects, leaving her to die. Philip is forced to go with him. Jack returns with the chalices and Gibbs, with whom he had reunited while assisting Barbossa. Jack and Blackbeard bargain for Jack's confiscated magical compass and Gibbs' release. In return, Jack vows to give Blackbeard the chalices and lead him to the Fountain; Blackbeard agrees and Gibbs departs with the compass.
At the Fountain, Blackbeard and his crew are met by Barbossa, and then by the Spanish, who are there to destroy the Fountain, their king believing its power is an abomination against God. A battle ensues and Barbossa stabs Blackbeard with a poison-laced sword. Angelica accidentally cuts herself while removing it from Blackbeard. Barbossa claims Blackbeard's magical sword, his ship, the Queen Anne's Revenge, and its crew as compensation for his amputated leg. Meanwhile, Philip, though mortally wounded, escapes and returns to free Syrena. After finding the chalices that the Spaniard had tossed into deep water, Syrena gives them to Jack, then retrieves the dying Philip as she kisses him and takes him underwater.
With Blackbeard and Angelica wounded, Jack brings the chalices to them and tries to convince Angelica to drink from the one with the tear, but Blackbeard asks his daughter to sacrifice herself. Angelica agrees and drinks. Knowing that the self-serving Blackbeard would sacrifice his daughter, Jack lied about which chalice contained the tear. The Fountain consumes Blackbeard's body, which kills him by turning him into a skeleton. Although Angelica admits her love for Jack, he strands her on an island, knowing that she may want to avenge her father's death. Barbossa, who now captains the Queen Anne's Revenge, resigns as privateer and reverts to piracy.
Jack finds Gibbs, who has used the compass to locate the shrunken Black Pearl and is shown to be in possession of all ships Blackbeard had shrunken in bottles. Hoping to bring the Black Pearl to its original size, the two head off into the sunset, determined to continue living a pirate's life.
In a post-credits scene, Blackbeard's voodoo doll of Jack has washed ashore on the island and is found by Angelica, to which she reacts with a grin.


Thanks for watching Pirates of the Caribbean: On Stranger Tides (2011 English Film) Full Movie