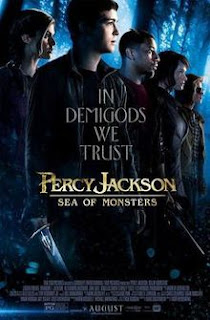 Description : The story begins with a young Annabeth, Luke, Grover and Thalia running to Camp Half-Blood while being pursued by monsters. Thalia sacrifices herself to get the others into the camp, and her father Zeus transforms her into a pine tree, creating a magical border around the camp so that no other half-blood would suffer from a fate as she did. The scene then shifts to Percy during a camp competition against Clarisse La Rue. Percy loses the competition after he assists another camper, and is badgered by Clarisse. Soon after, Chiron and Mr. D investigate a Cyclops that has somehow passed through the border, and the cyclops is revealed to be Tyson, Percy's half-brother. After the campers pick on Percy and Tyson, the camp is suddenly attacked by a Colchis Bull, who breaks through the border and ravages Camp Half-Blood. Percy finally defeats it with the help of Tyson, Annabeth, and Clarisse, and Luke Castellan suddenly appears and confronts Percy, trying to convert the son of Poseidon to his cause. When Percy refuses, Luke disappears.
The campers soon realize that Thalia's tree has been poisoned and that they have been left vulnerable to attacks. Percy asks Chiron about a prophecy he is involved in (for Luke had tried to bait him with the knowledge earlier), and subsequently visits the Oracle, who tells him of a prophecy of Percy either saving or destroying Olympus. Annabeth then proposes a quest to Mr. D, where they retrieve the Golden Fleece from Polyphemus in the Sea of Monsters and use it to heal Thalia's tree. Mr. D then announces the quest, but chooses Clarisse to lead the quest instead, much to Annabeth's and Percy's dismay. Percy then convinces Grover and Annabeth to accompany him on the quest, and Tyson joins them against the groups' wishes. Annabeth hails the Taxi of Damnation, and Percy threatens the three drivers to tell him of his prophecy, and they give him a set of coordinates in the Sea of Monsters before ejecting the group from the cab in Washington D.C. While walking down the street, Grover is kidnapped by Chris Rodriguez and taken to Luke. Meanwhile, Percy, Annabeth, and Tyson meet with Hermes and he gives them a thermos that releases the winds from the four corners of the earth, and a magical box sealer that, when taped around as a border, can make anything disappear. The three ride a Hippocampus to Luke's yacht, The Princess Andromeda, where they are captured and locked in the brig. Percy frees them with the box sealer and they escape after fighting through Luke's men and a Manticore, using the thermos to escape on the ship.
The group is consumed by Charybdis after Tyson loses the thermos, and they discover Clarisse in the monster's stomach. Percy and Clarisse work together to escape Charybdis's gut, and they arrive at CirceLand, Polyphemus's lair. Percy finds Grover and the five escape Polyphemus, retrieving the fleece and trapping him in his cave. Afterwards, Luke arrives and demands the fleece from Percy, who refuses. Luke shoots a crossbow at Percy, but Tyson takes the bolt in the chest before falling to the water below, much to Percy's shock.
Luke begins reviving Kronos as Percy laments over the loss of Tyson. The team then escapes captivity and a fight ensues. Percy grapples with Luke over the Fleece, but Luke easily gains the upper hand. Luke is suddenly thrown away by Tyson, revealed to have survived his wound, due to the water healing it, as he is Poseidon's son. The group however watches in horror as Kronos rises from the sarcophagus. Kronos consumes Luke and Grover, before battling Percy. Percy realizes that Riptide is the "cursed blade" of the prophecy, and slays Kronos with it, who regurgitates Grover and Luke, the latter landing in Polyphemus' Lair. Their victory is short lived as Annabeth is stabbed from behind by the Manticore, who is killed in turn by Clarisse and Grover. Annabeth dies in Percy's arms, but is resurrected by the Fleece. Percy then gives the fleece to Clarisse and they return to Camp Half-Blood. Clarisse places the fleece on Thalia's tree. The group returns later to find Thalia alive, as the fleece "did its job too well" and returned her to human form. The film ends with Percy realizing that Thalia is a child of Zeus, and therefore is another possible child of the prophecy about either preserving or destroying Olympus.