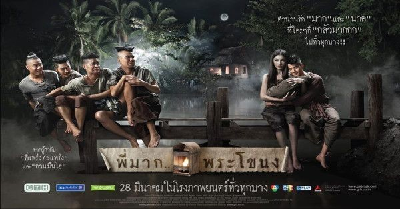 Description :
Once upon a time during the King Mongkut Era during which Siam was still plagued with wars with neighbouring kingdoms, Mak (Mario Maurer) was drafted to serve in a war against foreign invasion, forcing him to leave behind his pregnant wife Nak (Davika Hoorne) alone at home in the village of Phra Khanong in Bangkok. In the life-or-death frontline he met four soldier comrades who later became his best friends. Meanwhile, in Bangkok his wife Nak painfully struggled to give birth to their baby alone. After that rumours started circulating around that Nak had already died in labour and was now a ghost haunting the house and waiting for her husband's return. At night, villagers in the neighborhood would hear her sing a lullaby to help her son to go to sleep, causing hair-raising chills up and down the spine to the villagers who lived nearby.
When the war was over, Mak invited his friends to stay over at his house and meet his beautiful wife Nak. After a series of uncanny events, his four friends and some villagers worried for Mak's safety so they tried to tell Mak that his wife was already dead.