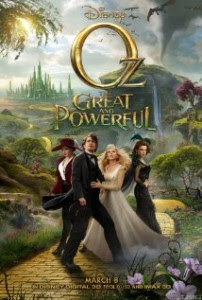 Description : In 1905 Kansas, Oscar "Oz" Diggs works as a small-time magician in a traveling circus. As a storm approaches, the circus strongman learns Oscar has flirted with his wife and goes after him. Oscar escapes in a hot air balloon, but is sucked into a tornado that takes him to the Land of Oz. There he encounters the beautiful yet naive witch Theodora, who believes him to be a wizard prophesied to destroy the Wicked Witch who killed the King of Oz. En route to the Emerald City, Theodora falls in love with Oscar. They encounter the flying monkey Finley, who pledges a life debt to Oscar when he saves Finley from a lion.
At the Emerald City, Oscar meets Theodora's sister Evanora, who tells him the Wicked Witch resides in the Dark Forest and can be killed by destroying her wand, the source of her powers. Oscar and Finley are joined en route to the forest by China Girl, a young, living china doll whose village and family were destroyed by the Wicked Witch. The three reach the forest and, upon retrieving the wand, discover the "Wicked Witch" is Glinda the Good Witch, who tells them Evanora is the real Wicked Witch. Evanora sees this with her crystal ball and manipulates Theodora against Oscar, falsely claiming he is trying to court all three witches. She offers the heartbroken Theodora a magic apple she says will remove her heartache. Theodora bites it and changes into a green-skinned Wicked Witch.
Glinda brings Oscar's group to her domain in Oz to escape Evanora's army of Winkies and flying baboons. She confides to Oscar that she knows he is not a wizard. However, she still believes he can help stop Evanora, and provides him an "army" of Quadlings, tinkers, and Munchkins. Theodora enters Glinda's domain and angrily reveals her new, hideous appearance to Oscar before threatening to kill him and his allies with the Emerald City's well-prepared army. Oscar despairs of his chances, but after telling China Girl about the exploits of his hero Thomas Edison, he realizes they can fight using prestidigitation.
Glinda and her subjects mount a mock attack on the Wicked Witches' castle using a pulley-rig army of scarecrows blanketed by thick fog. The witches are tricked into sending their flying baboons through a poppy field that puts them to sleep. However, two baboons manage to capture Glinda, who is brought to the city square and enchained. Meanwhile, Oscar infiltrates the Emerald City with his allies, only to seemingly abandon them in a hot air balloon loaded with gold, which Theodora destroys with a fireball. Oscar then secretly reveals himself to his friends, having faked his death. Using a hidden smoke machine and image projector, he presents a giant, holographic image of his face as his "true" form, and a fireworks display to attack and intimidate the Wicked Witches. Evanora fearfully hides in her castle while Theodora flees on her broom, unable to hurt the "invincible" wizard. China Girl frees Glinda, who defeats Evanora, destroying the Wicked Witch's emerald necklace that hides her true, crone-like appearance. The banished Evanora is carried off by the two remaining flying baboons.
Oscar, now King of Oz, uses his projector to sustain the belief he is a powerful wizard. He also presents gifts to his friends: Master Tinker, who helped build his machines, receives Oscar's camping-tool jackknife; Knuck, the grumpy Munchkin herald, receives a mask with a smiley face; the long-suffering Finley receives Oscar's friendship along with his top hat; and China Girl accepts her friends as her new family. Finally, Oscar takes Glinda behind the curtains of his projector and kisses her.