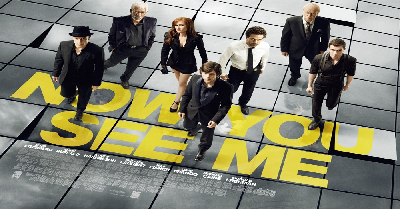 Four street magicians — J. Daniel Atlas, Henley Reeves, Jack Wilder, and Merritt McKinney—are brought together by an unknown benefactor and, one year later, perform in Las Vegas as "The Four Horsemen", sponsored by insurance magnate Arthur Tressler. For the finale, a member of the audience is invited to help them in their next trick: robbing a bank. That member in an audience is Étienne Forcier, the account holder at the Credit Republicain de Paris. Forcier is apparently teleported to his bank in Paris, where he activates an air-duct that vacuums up the money and showers it onto the crowd in Las Vegas.
Upon discovering that the money really is missing from the bank vault, FBI agent Dylan Rhodes is called to investigate the theft and is partnered with Interpol agent Alma Dray. They interrogate the Four Horsemen, but release them when no explanation can be found. Dylan meets Thaddeus Bradley, an ex-magician who makes money by revealing the secrets behind other magicians' tricks. Thaddeus was in the audience and deduced that the Four Horsemen stole the money weeks before, and manipulated the audience's perception of current events.
Dylan, Dray, and Thaddeus attend the Four Horsemen's next performance in New Orleans. The group's finale involves them stealing roughly $140 million from Tressler's bank account and distributing it to the audience, composed of people whose insurance claims had been denied or reduced by Tressler's company. Dylan attempts to arrest the Four Horsemen, but they escape with help from hypnotised audience members. An infuriated Tressler hires Thaddeus to expose and humiliate the Four Horsemen in their next performance. Later, while researching the Four Horsemen's background, Dray learns about rumors of a secret society of magicians called "The Eye", who steal from the rich and powerful to give to the needy, and suggests to a skeptical Dylan the case might be tied to a magician named Lionel Shrike, whom Thaddeus had exposed 30 years earlier and who was so embarrassed that he undertook a dangerous underwater stunt and drowned.
The Four Horsemen are located in New York, but they escape during the raid to arrest them. However, Jack is killed when he crashes a stolen car and it bursts into flames and explodes. The remaining Horsemen vow to continue and complete their final performance, stealing a safe made by the same company that made the safe Lionel Shrike died in. Then they perform their one last show at 5 Pointz during which they seemingly vanish into thin air, transforming into loads of money that is showered on the crowd. The money turns out to be a fake and the real money is found stashed in Thaddeus's Range Rover. Thaddeus is then assumed to be the fifth Horseman and arrested, although he said that he was framed.
Dylan visits Thaddeus in his cell, where Thaddeus explains that the only way the safe could have been removed was if Jack was still alive but they would have also needed an inside man. Thaddeus realizes that Dylan is the fifth Horseman (when he disappears from the locked cell, reappearing on the outside). Dylan tells Thaddeus he wants him to spend the rest of his life in jail and leaves as Thaddeus asks why he did it.
The Horsemen are now rejoined by Jack, whose death was staged. They finally meet their benefactor and are surprised to find it is Dylan. He welcomes them into "The Eye."
Later, on the Pont des Arts in France, Dray is met by Dylan (as he reveals himself to be the son of Lionel Shrike, the magician who drowned years ago). He masterminded and designed the Horsemen plot to obtain revenge on those involved: Thaddeus, for humiliating his father; the Credit Republicain de Paris and Tressler's company, who refused to pay the insurance on his father's death; and the company that produced the substandard safe used in the trick that led to its failure. Dray, however, decides not to turn him in. When Dray sees the lock with a key that Dylan magically handed out in front of her eyes, he proclaimed, "One more secret to lock away". As soon as Dray locks the lock on a chain fence with all of the locks that have been locked, she throws the key into the Seine.
In a post-credit scene in the extended cut, The Horsemen are seen arriving at the Neon Museum in Las Vegas. They find crates marked with the sign of the "Eye". The movie ends with them looking for the four key cards to open the crates that hold their new equipment.