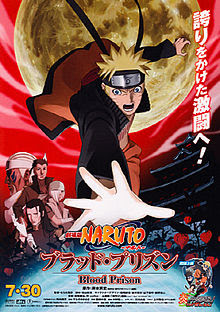 Description : Naruto Uzumaki is sent to a criminal containment facility known as Hoozuki Jou (鬼灯城?, lit. "Physalis Castle") in the Hidden Grass Village after he is declared responsible for the attempted assassination of the Raikage, leader of the Hidden Cloud Village, as well as the murders of Jōnin from the Hidden Mist Village and the Hidden Rock Village. Once there, Mui (無為?), the head of the prison, places the Tenrou o Tsukau (天牢を使う?, lit. "Sky Prison Control") seal on Naruto which limits his chakra. On the first night, Naruto uses a clone as a decoy to escape from prison. During his escape, his clone is secretly taken by Mui to have the Nine-tailed beast's chakra extracted which leads him to learn about Naruto's escape plan. Naruto is shortly recaptured and placed in solitary confinement which delays Mui's plans.

During his time in prison, Naruto befriends Ryuzetsu (竜舌?), a female ninja from the Hidden Grass Village pretending to be a male inmate. She explains Mui and a select few from the Hidden Grass Village framed Naruto to imprison him so they may extract the Nine tails' chakra to release the seal on the Box of Enlightenment which can grant any wish. Ryuzetsu also shares her plans to avenge her childhood friend Muku (無垢?), Mui's son who was sacrificed to the box ten years prior. Naruto accepts her offer of collaboration to destroy the box before it is unsealed. They begin their plan by initiating a prison riot which distracts the guards and allows Naruto to find the room with the sealed box. He is then captured by Mui and has his chakra extracted which unlocks the box. Disregarding his collaborators commands, Mui asks the box to return his son. Muku is released from the box and is possessed by the box's demon, Satori (悟り?). He fatally wounds his father, transforms into a monster, and goes on a rampage.

Naruto enters Sage Mode but is unable to defeat it. He is assisted by his peers from the Leaf Village and Cloud Village who were aware of the Hidden Grass' plans. During the battle, Naruto and Ryuzetsu are fatally wounded. Mui regains consciousness and seals Muku with the Tenrou which gives Naruto a chance for a direct attack. Muku returns to his human form, has a short bonding experience with his father, and kills him when Satori regains control. Muku then kills himself by using the Tenrou and Satori returns to the box after his death. With Mui's death, the prisoners are free from the Tenrou and attempt to escape from prison but are quickly recaptured. As Naruto nears death, Ryuzetsu uses a technique which sacrifices her life to save him. In the aftermath, the Box of Enlightenment is thrown into the ocean and Naruto returns to his comrades after burying Mui and Ryuzetsu.