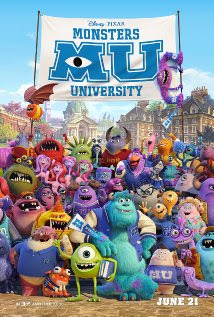 Description : After visiting Monsters Inc. (Monstropolis' most profitable and famous scaring company) on a school field trip (and sneaking into a child's bedroom and impressing a monster named Frank McCay), a young monster named Michael "Mike" Wazowski dreams of being a scarer when he grows up.

Mike studies hard, while the privileged Sulley, coming from a talented family of Scarers, relying on his natural scaring ability, begins to falter. At the final exam, Mike and Sulley's rivalry makes Dean Hardscrabble fail them both and drop them from the program, prompting Roar Omega Roar to remove Sulley from their team. Eventually Mike decides to prove himself by entering the Scare Games but Oozma Kappa (the only fraternity that was also removed from the program), is denied entry as they are one team member short. Seeing the competition as his ticket back into the scare program Sulley joins and Mike reluctantly accepts.

Oozma Kappa fails the first challenge (an obstacle course that demands the contestants dodge harmful glowing "urchins") but miraculously advances when another team (namely, Jaws Theta Chi) is disqualified. Soon they attend the Roar Omega Roar's party where the other competitors humiliate and discourage Oozma Kappa. Mike arranges a secret visit to Monsters, Inc. to lift their spirits, however Sulley still doubts that Mike can be a true scarer. After the team wins the final round, Mike discovers that Sulley cheated to improve Mike's score. Determined to prove he is capable of becoming a scarer, Mike breaks into the school's door lab and enters a door to the human world, but discovers that the door leads to a summer camp and he is unable to scare the cabin full of kids (with one of them remarking that he "looks funny").

Back at the university, Sulley confesses to Hardscrabble that he cheated, just as she's notified of the break-in. Realizing what happened, Sulley enters the door to look for Mike. After finding Mike and reconciling, they attempt to return, but find themselves trapped in the human world, as Hardscrabble has deactivated the door while waiting for the authorities to arrive. Mike realizes that the only way to get back into the monster world is to generate enough scream energy to power the door from their side.

Working together, Sulley and Mike terrify the adults, generating an overwhelming amount of scream energy and allowing them to return to the lab. Their actions lead to their expulsion from the university, but the other members of Oozma Kappa are accepted into the scare program the next semester as Hardscrabble was impressed with their performance in the games. They share goodbyes and as Sulley and Mike leave, Hardscrabble tells them they are the first to have surprised her and wishes them luck for the future. Mike and Sulley begin work at Monsters, Inc. in the company mailroom with the Abominable Snowman as the mailroom's manager. Working their way up through the company, the two eventually become part of the Scarer Team, thus setting the events of Monsters, Inc. in motion.