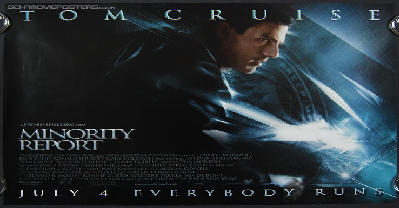 In April 2054, Captain John Anderton (Tom Cruise) is chief of the highly controversial Washington, D.C., PreCrime police force. They use visions of the future generated by three "precogs", mutated humans with precognitive abilities, to stop murders before they happen; because of this, the city has been murder-free for six years. Though Anderton is a respected member of the force, he is addicted to Clarity, an illegal psychoactive drug he began using after the disappearance of his son Sean.
With the PreCrime force poised to go nationwide, the system is audited by Danny Witwer (Colin Farrell), a member of the United States Justice Department. During the audit, the precogs predict that Anderton will murder a man named Leo Crow in 36 hours. Believing the incident to be a setup by Witwer, who is aware of Anderton's addiction, Anderton attempts to hide the case and quickly departs the area before Witwer begins a manhunt for him.
Anderton seeks the advice of Dr. Iris Hineman (Lois Smith), the lead researcher of the PreCrime technology. She explains to Anderton that sometimes the three precogs see different visions of the future, in which case the system only provides data on the two reports which agree; the "minority report", reflecting the potential future where a predicted killer would have done something different, is discarded. According to Dr. Hineman, the female precog Agatha is most likely to be the precog that witnesses the minority report.
Anderton undergoes a dangerous underground eye replacement to avoid detection by the city's optical recognition system. He travels back to PreCrime and kidnaps Agatha (Samantha Morton), which disables the precogs' hive mind and shuts down the system. Anderton takes Agatha to a shopping mall, and a hacker, who extracts both Agatha's vision of Crow's murder—with no differences from the other two precogs, so there was no minority report—and another of the murder of a woman named Anne Lively—which Agatha also showed to Anderton the day before he was incriminated.
Anderton and Agatha then head to the apartment where Crow is to be killed. Inside, Anderton finds hundreds of pictures of children, one of which is of his son, and concludes that Crow is responsible for Sean's disappearance. When Crow arrives, Anderton holds him at gunpoint, but ultimately decides to control his anger and places Crow under arrest instead. Crow admits that he was hired to plant these photos and then be killed, so his family would be paid handsomely.
Since Anderton refuses to kill him, Crow grabs the officer's hand and makes him fire at point-blank range, effectively committing suicide by cop. On the run, Anderton and Agatha approach his ex-wife Lara for refuge. Anderton learns Lively was Agatha's former drug-addicted mother, once before a target of a failed murder attempt after requesting to see her daughter before her death. Anderton realizes that his knowledge of the Lively case is why he is being targeted.
Meanwhile, Witwer assesses Crow's death and doubts that Anderton killed him in cold blood. He comes to recognize that the archival footage of Lively's murder shows what appears to be a future echo (or precog seeing the perpetration again) by one of the visions, routinely discarded by PreCrime. He, however, realizes this is a different murder as nearby water is rippling in a different direction from the original PreCrime vision. He suspects someone used this to stage the first murder attempt, and then recreated the setting to actually kill Lively and avoid being detected by PreCrime.
Witwer realizes that the murderer would had to have been someone high up in PreCrime to have access to the vision, and reports these findings to PreCrime's Director Lamar Burgess (Max von Sydow). Burgess, aware that the PreCrime division is currently disabled due to Agatha's absence, kills Witwer and frames Anderton for that murder as well.
The PreCrime unit eventually captures Anderton and restores Agatha to the system. Burgess attempts to comfort Lara, but accidentally reveals that he was the one that killed Lively. Lara acts on this information and frees Anderton at gunpoint. At a banquet to celebrate the success of the PreCrime unit attended by Burgess, Anderton plays back Agatha's vision of Lively's murder for the gathered crowd, which shows Burgess as the murderer. While Burgess begins to hunt down Anderton, a new PreCrime report is created: Anderton is the victim and Burgess, the murderer.
When Burgess catches up to Anderton, Anderton explains the impossible situation: if Burgess kills Anderton, he proves the system works but at the cost of a life sentence, while if he does not, the system will not have worked and the PreCrime division will be shut down. Anderton explains the fundamental flaw in the system: if one knows his or her future, he or she can change it. Burgess resolves the dilemma by killing himself. Before dying, Burgess apologizes for what he had done to Anderton. The PreCrime program is shut down and the prisoners are unconditionally pardoned and released, though police departments keep watch on many of them. Anderton and Lara remarry and start a new family. The precogs are sent to an "undisclosed location", a small uncharted island in the North Atlantic Ocean to live out a full happy life in peace.