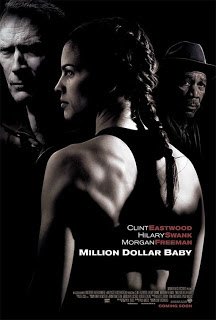 Description : Margaret "Maggie" Fitzgerald, a waitress from a Missouri town in the Ozarks, shows up in the Hit Pit, a run-down Los Angeles gym which is owned and operated by Frankie Dunn, a brilliant but only marginally successful boxing trainer. Maggie asks Dunn to train her, but he angrily responds that he "doesn't train girls."

Maggie attempts to win Frankie over by working out tirelessly each day in his gym, even when others discourage her. Eddie "Scrap-Iron" Dupris, Frankie's friend and employee, encourages and helps her all he can. "Scrap" also narrates the story.

Frankie's prize prospect, "Big" Willie Little, signs with successful manager Mickey Mack after becoming impatient with Dunn's rejecting offers for a championship bout. With prodding from Scrap and impressed with her persistence, Frankie reluctantly agrees to train Maggie. He warns her that he will teach her only the basics and then find her a manager. His most important advice is that she should protect herself in the ring at all times.

Before her first fight, Frankie leaves Maggie with another manager, much to her dismay, but rejoins her in the middle of the bout, and coaches her to victory. Maggie makes him promise not to abandon her again. Maggie turns out to be a natural. She fights her way up in the women's welterweight boxing division, winning many of her bouts with first-round knockouts. Estranged from his own daughter who returns his letters unopened, Frankie comes to establish an almost paternal bond with Maggie. Dupris becomes concerned when Frankie rejects several offers for big fights, though, and arranges a meeting for her with Mickey Mack, but she is loyal to Frankie, and is rewarded for her loyalty when he begrudgingly accepts a fight for her against a top-ranked opponent in the UK. He bestows a Gaelic nickname on her, which energizes the crowd, and the two travel Europe as she continues to win.

Maggie's own white trash family cares little for her well-being. Maggie saves up enough of her winnings to buy her mother a house, but instead of being grateful, she berates Maggie for endangering her welfare payments and Medicaid benefits. She also belittles her daughter's success in the ring, saying that everyone back home is laughing at her.

Frankie is finally willing to arrange a title fight. He secures Maggie a $1 million match in Las Vegas, Nevada against the WBA women's welterweight champion, Billie "The Blue Bear", a German ex-prostitute who has a reputation as a dirty fighter. Overcoming a shaky start, Maggie begins to dominate the fight, but after a round has ended, Billie knocks her out with a sucker punch from behind. Before Frankie can pull the corner stool out of the way, Maggie lands hard on it, breaking her neck and leaving her a quadriplegic.

At first, Frankie refuses to accept the bleak prognosis, but dozens of other medical opinions unanimously confirm there is no hope of recovery. He half-heartedly places the responsibility on Scrap for convincing him to train Maggie, but in the end blames himself.

In a medical rehabilitation facility, Maggie looks forward to a visit from her family, though Frankie repeatedly calls them with no success. Eventually, the family arrives—but only after first visiting Disneyland and Universal Studios Hollywood—and with an attorney in tow. Their lone concern is to arrange the transfer of Maggie's assets to them. She sees through their transparent scheme and orders them to leave, threatening to sell the house, which they have not claimed in their name to continue receiving welfare payments, out from under them if they ever show their faces again.

Frankie never leaves her side. He reads to her, urges her to go back to school and invites her to come live with him. As the days pass, however, Maggie develops bedsores and undergoes an amputation for an infected leg. She asks a favor of Frankie: to help her die while she can still remember the cheers she heard, saying she got what she most wanted out of life.

A horrified Frankie refuses, but seeks the advice of his priest, Father Horvak, whom he has tormented for 23 years. Horvak warns him that euthanasia is a grave sin, and that he will be lost forever if he goes through with it. Maggie bites her tongue repeatedly in an attempt to bleed to death, but the medical staff saves her life each time and takes measures to prevent further suicide attempts.

Frankie sneaks in one night. Just before administering a fatal injection of adrenaline, he finally tells Maggie the meaning of a nickname he gave her, Mo Chuisle (spelled incorrectly in the film as "mo cuishle"): Irish for "my darling, and my blood" (literally, "my pulse"). He then disappears for good. Scrap's narration is revealed to be a letter to Frankie's daughter, informing her of her father's true character.