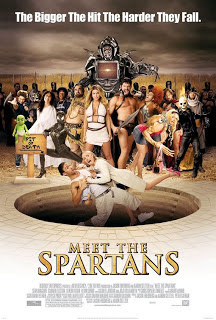 Description : The film opens with a Spartan elder inspecting an ugly, talking baby (an ogre from Shrek the Third); it is abandoned to die for its deformity. A second baby, who is Vietnamese, is adopted by Brad Pitt and Angelina Jolie. Baby Leonidas is then inspected, having a six-pack, biceps and beard from birth. He is accepted as a Spartan and prepared for kinghood through his childhood training, from fighting his grandmother to enduring torture (a la Casino Royale). Leonidas (Sean Maguire) is then cast out into the wild, and survives the harsh winter and a gangsta penguin (Happy Feet). Returning a king for his inauguration wearing a penguin skin hat, Leonidas sees Margo (Carmen Electra) erotically dancing and asks her to marry him, to which she responds by giving him the combination to her chastity belt.

Years later, Leonidas is training his son when Captain (Kevin Sorbo) informs him that a Persian messenger has arrived. Accompanied by the Spartan politician Traitoro, the messenger has come to present Xerxes' demands for Sparta's submission. Leonidas arrives to greet the messenger in the Spartan way (high-fives for the women and open mouth tongue kisses for the men). After growing angry with both the messenger's disrespect and finding him making out with his wife, Leonidas kicks him into the 'pit of death'. Despite "Traitoro's" advice that the messenger's guards are now needed to convey the actual message, Leonidas kicks them in as well. Afterwards, he dumps in several other people he simply dislikes, including Britney Spears (Nicole Parker), Sanjaya Malakar and the judges for American Idol before having Ryan Seacrest fling himself in. Resolving to face the Persians, Leonidas visits the Oracle, for any advice. The Oracle, Ugly Betty, reveals that Leonidas will die should he go to war. After reaching a decision while spending the night with his wife, Leonidas meets the soldiers assembled for his departure to Thermopylae, and finds that only 13 (not 300) were accepted in the army, since there were stringent specifications to be accepted— "Hunky with deep Mediterranean tans, hot bods, and well-endowed". Three among them include Captain, his son, Sonio, and a slightly unfit Spartan named Dilio, who, as the Captain states, "Has a lot of heart...and nice man boobs." Once at the Hot Gates, they encounter the deformed Paris Hilton (also played by Parker), who tells Leonidas and the Captain about a secret goat path above the Hot Gates that Xerxes could use to outflank the Spartans. When she asks to be made a Spartan soldier, Leonidas rejects her as unqualified due to her inability to use a spear correctly. Leonidas and his platoon soon face off with Xerxes' messenger and his Immortals, beating them in a dance contest before driving them off a cliff. Xerxes (Ken Davitian), who, is described as, "sort of looked like that fat guy from Borat", impressed, personally approaches Leonidas and attempts to bribe him. The Spartan king declines, saying that he will instead make him fall. The Spartans then face the Persian army in a "Yo Momma" fight. The Spartans end with a victory, in spite of Dilio having his eyes scratched out.

Though victory seemed to be in the Spartans' grasp, Paris Hilton betrays the Spartans and reveals the location of the goat path to Xerxes in return for various gifts. Using a CGI army (with the blue screen blatantly shown), Xerxes meets the twelve remaining Spartans and the war is on. Meanwhile, back in Sparta, Queen Margo has several confrontations with Traitoro, because he is the vital vote in sending more troops to assist her husband. Following her address to the Council, Traitoro publicly betrays the Queen. She defeats him in battle. Evidence is shown he is a traitor, uniting the council with the queen. At the Battle of Thermopylae, the Persians introduce their secret weapons: Ghost Rider and Rocky Balboa, who kills Sonio with a decapitating uppercut before his father avenges him with Botox poisoning. But when Captain is struck down by Xerxes, Leonidas pursues Xerxes and plays Grand Theft Auto. Managing to find the "Transformer Cube", Xerxes uses it in a car to become "Xerxestron" as he shows off his powers to access the "Leave Britney Alone!" video on YouTube. However, Xerxestron trips on his extension cord, fulfilling Leonidas' vow that he would fall at the cost of himself and surviving Spartans being crushed. The blind Dilio, who left prior to the final battle, eventually returns to Sparta to tell of Leonidas' final moments. A year later, Dilio leads a force of one hundred real Spartans and several thousand CGI-ones to defeat the Persians, but the blind warrior ends up going the wrong way. They end up in Malibu where they knock Lindsay Lohan down as she is leaving rehab (again).

The film ends with a musical number set to Gloria Gaynor's "I Will Survive" performed on American Idol by all of the characters in the film.


Thanks for watching Meet the Spartans (2008 English Film) Full Movie