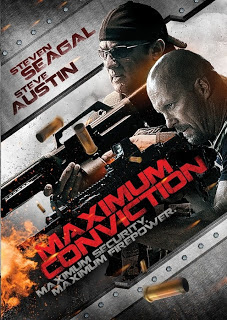 Description : It should be an easy day's work for former black ops operative Cross (Steven Seagal) and his partner Manning (Stone Cold Steve Austin). They and their group have been hired to oversee and orchestrate the decommissioning of a secret military penal facility, and organize the transport of the inmates to their new civilian prison.
Cross shows who's boss early on by beating up a large inmate who steps out of line, while Manning is given the task of running the prison's garbage facility. The day gets worse when a rolled up note is found that was accidentally dropped by an inmate, detailing times and locations for an attack on the facility.
Cross, on his way back to the prison from running an errand, and Manning, still dealing with that garbage facility, are suddenly involved in a foothold situation as Chris Blake (Michael Pare) and his mercenaries, posing as marshals, take over the complex.
Blake and his men are after the two newest inmates—Samantha Mendez (Steph Song) and Charlotte Walker (Aliyah O'Brien) -- for their own purposes—Blake wants the information that's in an implant that's inside of Samantha, who is a CIA courier, because it could lead to a lot of money for Blake, and it turns out that Charlotte is working for Blake. It's up to Cross, Manning, and their team to stop Blake and his men.