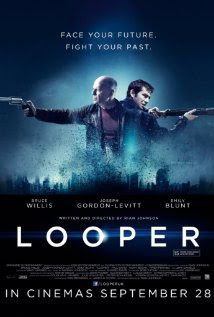 Description : In the year 2044, 25-year-old Joe (Joseph Gordon-Levitt) works for a Kansas City crime syndicate as a "looper". Managed by a man sent from the future named Abe (Jeff Daniels), loopers kill and dispose of victims sent back in time and are paid with bars of silver strapped to the target, whose face is hidden by a bag. When a looper is retired, the looper's future self is sent back thirty years as a target for themselves, but with gold bars as a payment. This event is referred to as "closing the loop", and failing to close the loop is punishable by execution, or rather progressive mutilation.

Seth (Paul Dano), Joe's best friend and part of a telekinetic minority, confides that he has failed to close his own loop, and that his future self (Frank Brennan) warned him of a mysterious person called the Rainmaker, who has in the future somehow overthrown the five major crime bosses by himself and is ending all of the loopers' contracts in 2074. Joe reluctantly hides Seth in his apartment's secret floor safe, but the place is searched and Joe is taken to Abe by Kid Blue (Noah Segan). Given the choice of revealing Seth's hiding place or forfeiting half of the silver he has hoarded, Joe betrays Seth. The syndicate starts mutilating Seth, knowing that the injuries will be propagated to his older self. They cut an address into Seth's arm, then begin removing parts of his body, compelling the older Seth to go to the address, where he is killed.

Joe's next target is late. When he does arrive, his hands are untied and his face is uncovered. It is Joe's older self (Bruce Willis), and, before Joe can close his loop, Old Joe shields himself with the gold bars strapped to his back. Knocking younger Joe unconscious as he reloads his blunderbuss, Old Joe then escapes. Returning to his apartment Young Joe fights with Kid Blue, only to fall off of a fire escape and black out.

In scenes from an alternate timeline, it is shown that Young Joe initially closes his loop, shooting his older self as he arrives on time, bound and with his head covered. He moves to Shanghai, where his drug addiction persists, as well as his need for a life of crime. Some time later he meets a woman (Xu Qing) during a bar fight, and after she initially rebuffs him, the two fall in love and marry. After his thirty years elapse Joe is taken to close the loop, but his wife is killed in the process. Overpowering his captors, Joe sends himself back to 2044 unbound and unmasked. Incapacitating his younger self as seen earlier, he returns to the city. Seeing his younger self fall from the fire escape, he drags his unconscious body to a safe location.

Old Joe explains to Young Joe that he is going to kill the Rainmaker as a child to change the future and save his wife. Young Joe tries but fails again to close his loop. Kid Blue and more of Abe's men show up, and a gunfight ensues. Young Joe ends up with a corner of Old Joe's map, which contains one of three locations circled on the map and a number.

Young Joe heads to the marked place, a farm where Sara (Emily Blunt) and her young son Cid (Pierce Gagnon) live. Sara distrusts him at first, but gradually warms to him. When Joe shows Sara the map, she recognizes the number as Cid's birthday along with the code of the hospital where he was born. Joe guesses Old Joe is going to kill all three children born that day, not knowing which one will become the Rainmaker. Joe decides to wait at the farm for his older self.

Jesse (Garret Dillahunt), one of Abe's men, comes looking for both Joes. He returns later and threatens Sara. Cid falls down the stairs and becomes upset, which triggers an enormous telekinetic blast that kills Jesse, revealing that Cid is a telekinetic of extraordinary power, and the future Rainmaker.

Meanwhile, Kid Blue captures Old Joe and takes him to Abe. Old Joe breaks free and kills Abe and many of his men. Old Joe then travels to Sara's farm. While Young Joe defeats and kills Kid Blue, Old Joe pursues Sara and Cid, eventually shooting at Cid, with the bullet grazing his face. Cid then creates another telekinetic blast, but is calmed by Sara before he can kill her and Old Joe. Telling Cid to run into the cane field, Sara stands in Old Joe's line of sight to shield her son. Young Joe, seeing Old Joe about to shoot Sara, realizes the event will anger Cid and turn him into the Rainmaker. Too far away to prevent it, he instead kills himself, thus erasing Old Joe, saving Sara, and potentially preventing Cid from becoming the Rainmaker.