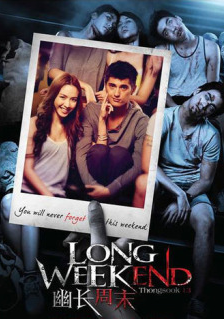 Description : Essentially a Thai-style reworking of ‘Friday the 13th’, ‘Long Weekend’ is a decently made horror that uses humour to enliven an otherwise standard bag of thrills. Like its Hollywood predecessor, it is built around a similar premise where a group of teenagers visit a supposedly haunted place and run into some bad company from a long time ago. The date of that ill-fated day? Yes, no prizes for getting that right.

Instead of the drowning of Jason Voorhees, the unfortunate event that sets the stage for the later proceedings is a ‘Devouring Spirit’ rite gone wrong. Apparently, on every Friday the 13th, the villagers of a particular island would offer live animals as sacrifices to the evil spirits; but on one such occasion, one of the teenagers involved in that rite accidentally lets slip a candle he is supposed to hold tight, unleashing the spirits which were devouring the animals in the enclosed shrine and thereby dooming the entire island.

Needless to say, our ‘adventurous’ group of five protagonists gamely decide to ignore warnings to the contrary and spend one night in an empty bungalow. Though intended as a party of five – made up of two guys, Boi (Sean Jindachot) and Jack (Acharanat Ariyaritwikol), and three girls, Nam (Cheeranat Yusanon), Beam (Busarin Yokpraipan) and Pui (Gitlapat Garasutraiwan) – they receive an uninvited companion in Thongsuk (Chinnawut Intarakusin), the mildly retarded introvert who has had a crush on Nam since young.

Unbeknownst to them, Thongsuk has a dark secret – he’s easily possessed by ghosts, and the amulet around his neck is meant as protection for him. The opening prologue also establishes the relationship between him and Nam, going back to their primary school days when he went into a seizure after removing the amulet on her request to demonstrate what it would be like to see a ghost. Their ignorance ultimately precipitates their downfall, as an unkind prank Boi and Jack play on Thongsuk goes horribly awry, basically allowing Thongsuk to become a conduit for the evil spirits on the island to return.

But first, Thongsuk’s inexplicable disappearance from where he was locked up causes the quintet to extend their stay, after Nam insists on leaving only after they have managed to locate him. That additional night turns out to be an ominous Friday the 13th, hence the return of every manner of evil the island has known. The same can also be said of director’s Taweewat Wantha’s repertoire of scares, which will certainly be familiar to even casual viewers of the horror genre.

Scripting with Adirek Watleela, Wantha keeps the energy up with some witty asides courtesy of the designated comic relief character Jack. At first fooling around in front and behind a handheld camcorder, Jack thankfully keeps his sense of humour even when evil descends – though the best moments tend to be quite macabre in nature. Particularly hilarious is Jack’s elaborate death sequence, in which he exclaims with resignation ‘I’m dead enough’ when the long-tail propeller of a motorised boat slices twice into his skull.

And indeed it is these occasional ‘killer’ lines that enable the movie to rise above mediocrity, which is unfortunately all that it offers the seasoned horror viewer. Even then, we can assure you that this is one of the better Thai horrors you will see – at the very least, it is largely coherent and relatively engaging. A long weekend it doesn’t deserve, but at a brisk 96 minutes, it won’t outstay its welcome.