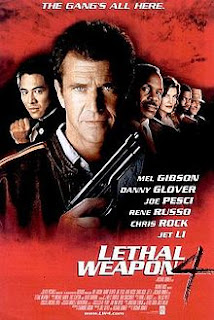 Description : Lorna Cole is pregnant with L.A.P.D. sergeant Martin Riggs' baby; they are not married, but both are thinking about it. Police sergeant Roger Murtaugh's daughter Rianne is also pregnant, and Riggs later learns from Lorna that Rianne has secretly married Lee Butters (Chris Rock), a young detective who works at the same precinct as Murtaugh and Riggs – secretly because Roger had made it clear that he does not want his daughter to marry a police officer. Due to the many disasters caused by both sergeants while on duty, the police department has lost its insurance carrier, and cannot get a new one while they're still out on the streets. Because firing them isn't a option, the Chief uses a special privilege and they get temporarily promoted to captains, given that there aren't any lieutenant spots available.
Riggs, Murtaugh, and Butters – with some assistance from Leo Getz (Pesci), who is now a private detective – investigate a Chinese immigrant smuggling ring after they come across a vessel with a cargo hold of Chinese slave laborers; in the course of these events Murtaugh's boat is sunk. Murtaugh finds a dinghy alongside with a Chinese family whom he provides shelter for at his house, claiming to be "freeing slaves."
Information about a crime boss named Benny Chan (Kim Chan), a.k.a. "Uncle Benny," leads them to Chinatown, where they are introduced to a high-ranking Triad negotiator named Wah Sing Ku (Jet Li). Benny forces the three cops out of the restaurant without providing information on what his and the Triads' plans are. Outside, the cops encounter the captain of the ship and chase him and another suspect. The other suspect turns out to be a restaurant waiter and is freed. Ku later kills the captain for letting the cops know about their secret plans.
Riggs and Murtaugh hire Leo to follow Benny around, but after Hong, the father of the Chinese family Murtaugh rescued, contacts his uncle, they come home to find Ku and his men holding Lorna and Murtaugh's family hostage and that Hong and his family are taken away. After a brief fight, the house is set on fire with everyone tied up inside. Ping, one of the Hong children, however, frees them, having eluded captivity. Murtaugh and Riggs chase down two of the triad members down a freeway, but both men are killed in collision with traffic without giving any information on the Hongs' whereabouts.
Ku and the other men visit a Chinese-based holding cell being run by a corrupt Chinese general, who is holding four Triad overlords known as the "Four Fathers," one of whom is Ku's brother, and demanding a huge payoff from the Triads for their release.
After Riggs and Murtaugh return to Murtaugh's home, Leo informs them and Butters that Benny is seeing his dentist, and using Leo to distract the dentist, the three cops use nitrous oxide to extract information from Benny. Riggs inadvertently reveals that Butters is Rianne's husband and the father of her baby. Because they had accidentally exposed themselves to the laughing gas as well, they misunderstood the information Benny provided them, which initially leads to some complications in their investigation.
Ku brings the Hongs to the Triads' hideout, where it is revealed that the Triads plan to give the corrupt general counterfeit Chinese money for the Four Fathers' release. The captive artist working on the printing plates is the elder uncle to Hong and agreed to do the job in exchange for his family's safe passage to the United States. Ku kills Hong in order to secure his uncle's cooperation. With the printing plates completed, he and Benny are also killed for exposing the operation and to protect the forgery.
Detective Ng, who is familiar with Chinese society, corrects Murtaugh and the other officers on the information Benny provided earlier and explains why the Triads torched Murtaugh's home. After Riggs picks up Ping and Lorna, the officers locate the hideout, but find only the dead and some of the counterfeit Chinese money inside. Ng once again helps them piece the entire operation together.
At the meeting between Ku and the corrupt general, Riggs, Murtaugh, Butters and other detectives expose the counterfeit money; as a result the general kills three of the Four Fathers. Ku's henchmen kill the general, and a firefight breaks out between the cops, the Triads and the general's private army. Butters is shot in the back while protecting Murtaugh and Murtaugh kills Ku's brother while aiming for Ku. In revenge, Ku tries to kill Riggs and Murtaugh on a pier. Murtaugh is knocked out after impaling Ku on a piece of rebar while Riggs and Ku fall into the water when the pier collapses. Riggs struggles with Ku underwater and shoots him to death with an AK-47, but a slab of concrete from the pier falls and pins Riggs underwater until Murtaugh wakes up, jumps in, and saves him.
Riggs visits his dead wife's grave and asks her for advice about his impending marriage with Lorna, about which he still has doubts. He is interrupted by the arrival of Leo, who tells a story from his childhood that makes Riggs see the idea of remarrying in a new light. Riggs' pager goes off, indicating that Lorna is giving birth, and the two rush to the hospital. Riggs and Lorna are ceremonially married by a rabbi just before their and Rianne's babies are born, Murtaugh accepts Butters as his son-in-law, Riggs and Murtaugh are given their rank of Sergeant back and Hong's family is granted asylum.